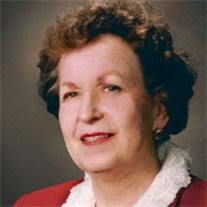 Faye Francella Walton Barrett passed away peacefully in her home in Provo, Utah, at the age of 88, the evening of February 19, 2013 in the presence of her husband Theodore Barrett, whose care and devotion for her is unsurpassed. His 24:7 love for her and service to her every need is a model for any caring companion to follow. Married March 21st, the first day of Spring, 1947, they would have celebrated their 66th anniversary this coming month. They were sealed in the Salt Lake Temple June 23, 1955. Faye was born April 28, 1924 to Arthur and Florence Rasmussen Walton. She was raised near the University of Utah and remembered fondly attending Stewart Elementary. At age fourteen her family moved to South Cottonwood where she graduated from Granite High followed by coursework at the University of Utah. Faye also worked at the Kearns Army Air Base during World War II. It was in South Cottonwood that Faye met her eternal companion Theodore Barrett who won her with cowboy songs, great looks, good humor and athletic prowess. They began their life together in Tooele and Moab, working in the mining industry, finally making their home in Salt Lake City where they raised their family. They have lived for the past thirteen years in Provo, Utah surrounded by family. Faye loved the arts and good literature and taught her children and grandchildren to love them. Her life and her home, adorned with her beautiful ceramics and paintings of her own creation, bear the imprint of that love. And so does her family and all who knew and loved her. Even though she had lost her sight, she taught the rest of us to see and to value that which is virtuous, lovely, of good report or praiseworthy. Ever the teacher, even in her death she taught the rest of us how to live. Her mind was alert and her humor intact up until the time of her passing. So was her enjoyment of good books as her husband read to her hour after hour, putting her to sleep each night. In recent months they consumed together more good books than most people read in a lifetime. Faye won the love of her children and grandchildren through her attentive care and devotion to them. A sleepover at Grandma's house meant not only good food, treats and pampering, but lessons in ceramics, paintings and life. Her love of the restored gospel was demonstrated not only through her lifelong activity and service in the Church, but by the way she lived it and served others. Even when we thought we were serving her, it was she who was teaching us how to love and to live and to serve. It is those enduring qualities that have endeared each of us to her and allowed her to endure to the end. We express our deep appreciation to her physician, Dr. Chad Kimball who attended her passing and to Joyln Brereton and Verna Nelson whose attentive care brought great comfort to Faye, Ted and each of the family. We also express our appreciation to her granddaughters Katherine and Katie whose ministering care brought needed respite to her and Ted in recent months. Faye is survived by her husband Theodore Barrett, children Wayne [Thaylene] Barrett, Robert [Vicki] Barrett, William [Hawley] Barrett, Rebecca [Tino] Santa Cruz, 23 grandchildren and 30 great-grandchildren. Faye is preceded in death by both parents and her brothers Wayne and Gene Walton. Funeral services will be held at 12:00 noon, Tuesday, February 26, 2013 at the Edgemont Stake Center, 303 West 3700 North, Provo, Utah. Friends may call at the Berg Mortuary of Provo, 185 East Center Street, Monday evening from 6 until 8 and at the church Tuesday from 10:30-11:45 a.m. prior to services. Interment will be at Wasatch Lawn Memorial Park in Salt Lake City following the funeral service. Condolences may be sent through her obituary at www.bergmortuary.com.

Faye Francella Walton Barrett passed away peacefully in her home in Provo, Utah, at the age of 88, the evening of February 19, 2013 in the presence of her husband Theodore Barrett, whose care and devotion for her is unsurpassed. His 24:7 love... View Obituary & Service Information

The family of Faye Walton Barrett created this Life Tributes page to make it easy to share your memories.

Faye Francella Walton Barrett passed away peacefully in her home...