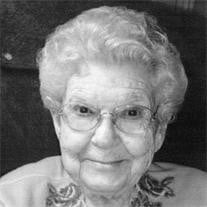 On February 26, 2011, just one day after her ninety-sixth birthday, Florence Todd Britsch passed away of causes incident to age. Florence was born in Talmage, Utah, on February 25, 1915, the eldest of nine children of Douglas McClain Todd, Jr. and Margaret Gray Burton Todd. Her childhood and youth were spent in numerous Utah towns and cities, where she received her initial education; she graduated from Jordan High School in 1933. Early in her life she began piano and organ lessons, and by junior high school she was playing solos and accompanying musicians, dancers, and choirs throughout Salt Lake Valley. She was a student body or class officer in almost every grade. Florence enrolled in Brigham Young University, where she continued her music and school activities. During her time there she met Ralph A. Britsch whose singing lessons she accompanied. They were married on December 18, 1936, in the Salt Lake LDS Temple. She completed her bachelor’s degree in music in 1938. After two years teaching at Provo High School, Ralph joined the faculty of Brigham Young University, and, except for a few years in Midway, Florence and he spent the rest their lives in Provo. Florence and Ralph had three sons and two daughters. Ralph died July 6, 1994. Florence’s life was filled with work and service. She taught hundreds of piano students; at times she had more than fifty a week. Into her late eighties she still had students asking her to teach them. She also taught elementary school in several Provo schools. For a number of years she was on a Curriculum Committee that wrote lessons for children in the Church of Jesus Christ of Latter-day Saints. In 1974 her skills as a parent and homemaker were acknowledged when she was named Utah Mother of the Year. Over the years she received several awards from Brigham Young University. In addition, she accompanied many soloists, choruses, and other groups–often with Ralph as the director. Florence was always active in her Church. In addition to her music contributions (she accompanied the choir and played in Church meetings through age ninety-two), she served in a variety of Stake and Ward callings–often working with children. She and Ralph were missionaries in Tonga and New Zealand and they served many years in the Provo Temple. Florence is survived by her five children: Todd A. (Judy) Britsch, Provo; R. Lanier (Shirley), Orem; Charlotte (David) Hamblin, Salt Lake City; Merlene (Michael) Ellington, Mount Pleasant; and Royden E. (Christine) Britsch, Las Vegas Nevada. She is also survived by nineteen grandchildren, fifty-eight great-grandchildren, and four siblings–Alice Braithwaite, Norma Mabey, Ira (Pat) Todd, and Byron (Dale) Todd, and sisters-in-law Phyllis Todd and Beverly Todd. She was preceded in death by her husband Ralph, daughters-in-law Dorothy (Todd) Britsch and JoAnn (Lanier) Britsch, grandson Daniel Britsch, her sisters Beth Snow and Elaine Paige, and her brothers Burton and Robert Todd. Funeral services will be held at 11:00 a.m., Friday, March 4, 2011 at the Edgemont 2nd Ward Chapel, 555 East 3230 North, Provo, Utah. Friends may call at the Berg Mortuary of Provo, 185 East Center Street, Thursday evening from 6 until 8 and Friday at the church one hour prior to services. Interment, East Lawn Memorial Hills. Florence loved and supported the charities established by Charlotte and David Hamblin to aid the poor in Africa. Contributions in her name can be made to No Poor Among Us, 1570 Tomahawk Drive, Salt Lake City, UT, 84103. Messages of condolence may be sent to www.bergmortuary.com.

On February 26, 2011, just one day after her ninety-sixth birthday, Florence Todd Britsch passed away of causes incident to age. Florence was born in Talmage, Utah, on February 25, 1915, the eldest of nine children of Douglas McClain Todd, Jr.... View Obituary & Service Information

The family of Florence Britsch created this Life Tributes page to make it easy to share your memories.

Send flowers to the Britsch family.