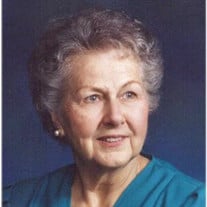 Lifetime Utah County resident, Florence Lorraine Patten Zahlmann, passed away on June 2, 2015 at the age of 86 in Salem, Oregon. Florence was born on April 20, 1929 in Payson, Utah to Charles Henry and Sofie Wilhelmina Neilsen Patten. Florence was the youngest child of a large and loving family that lived through some tough times and were taught to make good use of what was on hand. She remained in Payson, continued to develop her singing talents and had the lead in several Payson operettas. Florence worked as a telephone operator until she met and married Nephi (Dutch) William Zahlmann on April 5, 1951, who also worked for AT&T. Following their marriage, they relocated to Provo, Utah. Florence and Dutch were early residents of the Edgemont area of Provo, near the current location of Timpview High School and lived there for almost 60 years. Following the raising of her children, she worked in Provo School District cafeterias until she retired. She has always been very grateful for good friends and neighbors who were together in the neighborhood for the better part of 40 years. The closeness she had with family and friends gave her family the best possible opportunities for future success. Florence held many Church callings in the Primary and as a temple worker, which gave her the opportunity to utilize her talents. She was preceded in death by her husband; daughter, Susan McEwen; father; mother; seven brothers and six sisters. She is survived by her daughter, JoAnn (Paul) Walker (Kent, WA); son, Chris (Dolores) Zahlmann (Albany, OR); brother, Boyd Patten (St. George, UT); sisters, Dune Lazenby (Santa Paula, CA) and Helen Davis (Provo, UT); 15 grandchildren and 25 great-grandchildren. Her love and kindness will be sorely missed. Graveside services will be held at 11:00 a.m., Saturday, June 6, 2015 at East Lawn Memorial Hills, 4800 North 650 East, Provo, Utah. Condolences may be extended to the family at www.bergmortuary.com.

The family of Florence Lorraine Patten Zahlmann created this Life Tributes page to make it easy to share your memories.

Send flowers to the Zahlmann family.