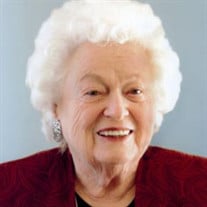 Florence Francis Rogers, age 95, passed away peacefully surrounded by loved ones on December 15, 2014 at home from causes incident to age. Florence was born in Morgan, UT on November 10, 1919, to Howard and Jessie Taggart Francis. She married Robison Max Rogers on September 18, 1941 in the Salt Lake Temple. He preceded her in death 3 years ago. Florence graduated from Weber Junior College and Brigham Young University as a music and speech and drama major. Inspired by a great vocal music teacher, Dr. Florence Jeppersen Madsen, Florence became an outstanding vocalist and might also have become a great vocal teacher, but she chose marriage and family rather than a professional career. Nevertheless, she blessed the lives of hundreds of people as Ward Choir Director, Relief Society Music Director, and later Director of the Madsen Memorial Chorus. In 1961, she traveled with the LDS Singing Mothers on a tour of Great Britain arranged in honor of the Hyde Park Chapel dedication in London. In April of 1982, the City of Provo and the Sons and Daughters of Utah Pioneers chose to honor Florence for her selfless achievements in music. She was an Honorary Member of BYU Women and the Provo Women’s Council. An active member of The Church of Jesus Christ of Latter-day Saints, Florence faithfully served in all of her many callings. With her husband, Max, she volunteered at the Provo Temple for twenty six years. They also served two temple missions together, one in Switzerland and the other in Atlanta, Georgia. Florence accompanied Max on a number of BYU Semester Abroad Travel Study programs to Europe, a program that Max initiated through BYU. They traveled extensively, having visited Scandinavia, most European countries, Australia and New Zealand, as well as the Far East. The jewels in her crown were her family. She is survived by her six children: Kay Durrant, Francis (Leena) Rogers, Paul (Susan) Rogers, Russell (Julie) Rogers, Joel (LeeAnn) Rogers, Karalee (Jed) Ransom; and three brothers: Kent Francis, George (Gwen) Francis and Scott (LaJean) Francis. Florence is the proud Grandmother of 38 and Great-Grandmother of 56. She was preceded in death by an infant daughter, Kerri; brother, Don Taggart Francis; sister, Elaine Branch; and an infant grandson, Nathan Shaun Rogers. We are grateful to angel granddaughters who lovingly cared for her: Andrea Rogers, Laura Rogers, Amber Rogers, and Rachel Rogers. Special thanks to Dr. Gary Holland. Funeral services will be held at 11:30 a.m., Saturday, December 20, 2014 at the Oak Hills 7th Ward Chapel, 1038 North 1200 East, Provo, Utah. Family and friends may call at the church from 10-11:15 a.m. prior to services. Interment, East Lawn Memorial Hills, Provo, Utah. Condolences may be sent online at www.bergmortuary.com.

Florence Francis Rogers, age 95, passed away peacefully surrounded by loved ones on December 15, 2014 at home from causes incident to age. Florence was born in Morgan, UT on November 10, 1919, to Howard and Jessie Taggart Francis. She married... View Obituary & Service Information

The family of Florence Francis Rogers created this Life Tributes page to make it easy to share your memories.

Send flowers to the Rogers family.