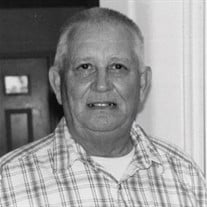 Floyd Charles “Chuck” Baum, husband, father, grandpa, uncle and friend passed away Tuesday, November 29, 2016 in Orem, Utah. Chuck was born August 23, 1927 to Floyd and Edith (Giles) Baum in Conda Idaho, the oldest of 6 children. He graduated from Provo High School in 1945. Chuck was a Seaman First Class for the US Navy stationed in Pearl Harbor Hawaii. He was Honorably Discharged on July 19, 1946. In 1947, He began his truck driving career at US Steel. He married Louise (Bishop) Baum on March 24, 1963 in Elko Nevada. He started a part-time dry ice business while employed at US Steel and continued to operate Chuck and Son’s Dry Ice full time after his 30-year retirement from US Steel in 1976. He was an avid baseball player and a fan. He also enjoyed playing board games with family and friends. Bingo and Shuffleboard were among his favorites. He was a kind and giving man. He would help others in need in any way he could by offering tools, services, money and just about anything else someone may have needed. Chuck is survived by his wife, Louise; children: Joyce Baum (daughter in-law) Randy (Robyn) Baum, Ed (Renae) Baum, Bob (Jennifer) Baum, Susan (Rich) Norman, Karen (Jim) Pritchett, Joseph (Mariann) Bradbury (son in-law) Tuffy (Theresa) Baum, Thomas (Sonja) Baum: Brothers and sister Mary Baum (sister in-law) Gordon Giles “GG” (Shirley) Baum, Farrell Baum, Carol Baum (sister in-law), and Marsha Jenkins: 40 grandchildren; 110 great-grandchildren; 6 great-great-grandchildren, and many other loving nephews, nieces and relatives. He is preceded in death by his father Floyd, mother Edith, brothers, Blaine and Alan, son Russell, daughter Mariann and great-granddaughter Kendra Naisbitt. Our family would like to express our sincere appreciation to the staff at Our House in Orem for the kindness and care provided to Chuck. Graveside services will be held at 12:00 noon, Wednesday, December 7, 2016 at Timpanogos Memorial Gardens, 1000 North 400 East, Orem, Utah. Friends may call at the Berg Mortuary of Orem, 500 North State Street, from 10-11:30 a.m. prior to services at the cemetery. Condolences may be expressed at www.bergmortuary.com.

The family of Floyd Charles "Chuck" Baum created this Life Tributes page to make it easy to share your memories.

Send flowers to the Baum family.