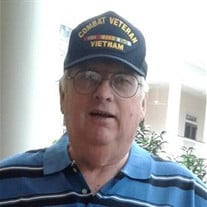 Floyd Dale Nuttall was born July 30, 1949 to Thomas Leland and Madge Lucas Nuttall in Provo, Utah. He passed away in his home in Pleasant Grove, Utah on September 26, 2019. Floyd was the seventh of eleven children. He graduated from Provo High School and from Utah Trade Technical College. He served in Vietnam with the US Army. He received several medals and awards of honor for his service, one of which was an Army Commendation medal with "V" device awarded for heroism in action while engaged in military operations. Upon returning home from the war, he started his career in the grocery business. He was a valued employee never missing a day of work until his retirement in 2018. Floyd loved old movies, Country Western music, playing Santa Claus and most of all his family. He was always the first to ask what he could do when anyone needed help. He was large in stature and had a large heart to go along with it. Floyd was preceded in death by his parents Thomas and Madge Nuttall, one sister (Linda Nuttall), one brother (Larry Nuttall), and one brother-in-law (Jerry Springer). He is survived by eight siblings and one sister-in-law: Arlene Springer, Nancy Nuttall, Gene (Charlene) Nuttall, David (Sherry) Nuttall, Tom (Sharon) Nuttall, Peggy (Jim) Hopkinson, Ron (Leslie) Nuttall, Janene (Chad) Curtis, Marcie Nuttall, and many nieces and nephews and cousins who will miss his support, love, and Christmas hams. He couldn't have been a more loyal brother. Funeral services will be held at 11:00 a.m., Thursday, October 3, 2019 at the Berg Drawing Room Chapel, 185 East Center Street, Provo, Utah. Friends may visit with the family at the mortuary on Wednesday, October 2 from 6-8:00 p.m. and Thursday from 9:30-10:50 a.m. prior to services. Interment, Utah Veterans Memorial Park Cemetery. Condolences may be expressed at www.bergmortuary.com.

Floyd Dale Nuttall was born July 30, 1949 to Thomas Leland and Madge Lucas Nuttall in Provo, Utah. He passed away in his home in Pleasant Grove, Utah on September 26, 2019. Floyd was the seventh of eleven children. He graduated from Provo High... View Obituary & Service Information

The family of Floyd Dale Nuttall created this Life Tributes page to make it easy to share your memories.

Send flowers to the Nuttall family.