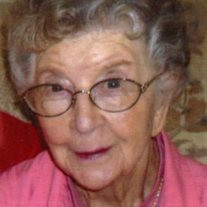 Frances Simons Wilde passed away in Orem, Utah, on March 2, 2014, eleven days before her 102nd birthday. Born on March 13, 1912, to Ezra Ord and Effie May Mattinson Simons, she spent her early years in Salem, Utah, and later attended Spanish Fork High School. She married William H. “Bill” Wilde on June 13, 1932. Their marriage was later solemnized in the Salt Lake Temple. They lived their entire married life in Provo and raised two children, Jim and Carlene. Frances was an active member of The Church of Jesus Christ of Latter-day Saints, having served in many capacities, including President of the Relief Society and Primary in Manavu Ward. She and her husband served many years as temple workers in the Provo Temple. Frances loved her family and friends and spent much of her long life enjoying and serving others. She is survived by her two children, James L. Wilde (Kathy) and Carlene Wilde Murry (Mark), nine grandchildren, 29 great-grandchildren and a sister Florence S. Husari. Her many nieces, nephews and their children were also an important part of her life. She was preceded in death by her husband Bill, her parents, three brothers: Keith, Daryl, and Jack Simons, and two sisters: Geneve Simons McQuivey and Kathryn Simons. Her family extends heartfelt gratitude to the staffs of Jamestown Assisted Living, Summerfield Manor Assisted Living, Curo Hospice Care and many dear friends in the Provo Slate Canyon Fifth Ward for their kindness and love shown to Frances. Funeral services will be held at 11:00 a.m., Thursday, March 6, 2014 at the Berg Drawing Room Chapel, 185 East Center Street, Provo, Utah. Friends may call from 10-10:50 a.m. prior to the funeral. Interment will be at the Provo City Cemetery. Condolences may be sent online at www.bergmortuary.com.

Frances Simons Wilde passed away in Orem, Utah, on March 2, 2014, eleven days before her 102nd birthday. Born on March 13, 1912, to Ezra Ord and Effie May Mattinson Simons, she spent her early years in Salem, Utah, and later attended Spanish... View Obituary & Service Information

The family of Frances Simons Wilde created this Life Tributes page to make it easy to share your memories.

Send flowers to the Wilde family.