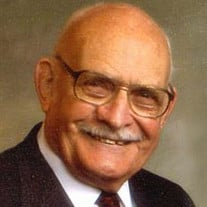 Frank Homer Gardner, age 94, passed peacefully away at his home on February 4, 2016. Born March 8, 1921 in Provo, Utah, the eldest of five children of Frank T. and Ada Emily Hickman Gardner. Married his high school sweetheart, Norma Jean Taylor in the Salt Lake LDS Temple on October 6, 1943, following his commissioning as an ensign in the U.S. Navy. He subsequently served on active duty as a naval officer for two and a half years during World War II. He was one who loved the Lord, his wife, Norma, all the members of his family, his friends and associates, and The Church of Jesus Christ of Latter-day Saints. He was grateful for the challenges and opportunities that came to him during his life which was filled with rich and rewarding experiences. His was a life of happiness. He grew up during the Great Depression, and his father’s employment assignments required that they live in a number of cities during that time (Price, Ogden, Salt Lake City, and Payson). The family returned to Provo in 1933. While attending Provo High School, he served as Junior Class President, Student Body President, and Valedictorian. Following his graduation from Provo High School, he graduated from Brigham Young University where he majored in Accounting and Business Administration, and the Harvard Business School. At BYU he was Junior Class President and President of the Blue Key National Honor Society. He was a Certified Public Accountant. His professional career as a CPA evolved as a partner in three local firms and two national firms. At the time of his retirement in July 1986, he was a tax partner with Grant Thornton, the fifth largest national accounting and consulting firm. He was a life member of the Utah Association of Certified Public Accountants and the American Institute of Certified Public Accountants. His public service included BYU Major Gifts campaigns for the funding of the Marriott Center and Cougar Stadium (now LaVell Edwards Stadium), a member of the BYU Alumni Association Board, member of the board of directors of the Provo Chamber of Commerce, the board of directors of the UVSC Foundation, treasurer of the Riverside Country Club, president and treasurer of the Provo Rotary Club, and Paul Harris Fellow of Rotary International. He was an Eagle Scout. His LDS Church service included counselor in a stake presidency, member of two stake high councils, stake auditor, and numerous ward and stake assignments. His favorite church calling was serving with Norma as Sacrament Meeting greeters under five bishops in the Oak Hills Second Ward. He was preceded in death by his wife, Norma; parents; three sisters: Marjorie G. Fults, Helen G. Gould, and Adene G. Houtz; grandson, Jonathan T. Gardner and great-grandson, Carter Gardner. He is survived by his four children: Sherman F. Gardner (Eileen), Tempe, AZ; Jan Lundeberg (Carl), Salt Lake City, UT; John B. Gardner (Julie), West Jordan, UT; Suzie Gardner, Provo, UT; a brother, Richard M. Gardner (Margo), Scottsdale, AZ; 10 grandchildren and 16 great-grandchildren. Funeral services will be held at 11:00 a.m., Tuesday, February 9, 2016 at the Oak Hills Stake Center, 925 East North Temple Drive, Provo, Utah. Friends may call at the Berg Mortuary of Provo, 185 East Center Street, Monday from 6-8:00 p.m. and at the church Tuesday, from 9:30-10:45 a.m. prior to services. Interment, Provo City Cemetery. Condolences may be extended to the family at www.bergmortuary.com.

The family of Frank Homer Gardner created this Life Tributes page to make it easy to share your memories.

Frank Homer Gardner, age 94, passed peacefully away at his home...

Send flowers to the Gardner family.