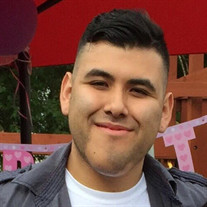 Frank “Junior” Dario Hernandez was born April 6th, 1992 to Francisco Hernandez and Laura Sigala in Monterey, California. As a young child, he moved to Oregon with his family. Frank graduated and received his diploma at McNary High School and also obtained a certification in Collision Repair and Refinish Technician at Job Corps. He always wanted to follow his father’s footsteps, so after graduating he moved to Provo Utah to live with his step-mother Kimberly Hernandez and father. Frank spent his last 6 years of life working side by side with his father. Frank and his father worked in the dry wall business. Frank was a very adventurous kind gentle soul. Whoever he met wanted to be his friend. People would be pulled in by his positive lovable energy. He could make anyone laugh until your stomach hurt. Frank took the time to know you and really listen. He was a great listener. If you needed a shoulder to cry on or just vent, he was there. If you wanted to go on an adventure, he would go. If he saw that you needed anything, without asking, he delivered, no questions asked. He liked to look out for others with no expectation of anything in return. Frank loved the outdoors, he loved to hike, travel, go fishing, play video games, play basketball, he enjoyed collecting hats and shoes, bake cookies, but most of all he LOVED food. In all seriousness, what mattered most to Frank was his family and his friendships. He will be missed dearly. Frank is survived by his mother Laura Sigala, his father Francisco and step-mother Kimberly Hernandez, his sisters Josie Hernandez, Jolisia Romero, Maritsa Hernandez, Jessenya Hernandez and brothers Daniel Hernandez and Azeriah Hernandez. Frank passed away on April 15th, 2018. Memorial services will be held at 1:00 p.m., Saturday, April 21st, 2018 at the Sunset 11th Ward Chapel, 1560 S 1100 W, Provo, UT 84601. Condolences may be expressed at www.bergmortuary.com. 801-373-1841

Frank &#8220;Junior&#8221; Dario Hernandez was born April 6th, 1992 to Francisco Hernandez and Laura Sigala in Monterey, California. As a young child, he moved to Oregon with his family. Frank graduated and received his diploma at McNary High... View Obituary & Service Information

The family of Frank Dario Hernandez created this Life Tributes page to make it easy to share your memories.

Send flowers to the Hernandez family.