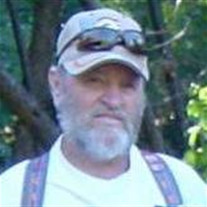 Frank Landis Woodward passed away peacefully while surrounded by family on April 27, 2015. He was born July 30, 1939 in Heeney, CO to Leonard Andrew and Rhoda Mae Simpson Woodward. On May 15, 1959 he married Karen Damico. They lived in Springville, UT, where together they had three children: Mary (Darcy) Halvorson, Richard (Belinda) Woodward, and Stanley (Sherrie) Woodward. They later divorced. On September 7, 1968 he married Caroline Beth Moon and lived in Orem, UT where they raised four children: Elizabeth (Daniel) Hebden, Tina Woodward, Clinton Woodward, and Teressa (Bob) Burnham. He is affectionately loved by 23 grandchildren and 4 great-grandchildren who enjoyed his love and humor. Frank Graduated from Springville High and went to work with the Bureau of Reclamation for over 30 years. He worked on many projects where he was known as “TINK”. He loved the outdoors, hunting, playing pool, spending time with family, building things with his hands and finding good deals at yard sales and swap meets; no yard sale will be the same without him. Frank was a member of The Church of Jesus Christ of Latter -day Saints. He always gave much to others, never asking for anything in return. He is survived by his wife, Caroline; brother, Leon (DeAnn) Woodward; sisters, Carolyn (Jim) Ormond, Sandra Phelts, Faye Espinosa and Candy Haas; 6 children; 21 grandchildren and 4 great-grandchildren. He was preceded in death by his parents: son, Clinton Woodward; brother, Tim Woodward; and grandsons, Darin and Jayden Burnham. Funeral services will be held at 11:00 a.m., Thursday, April 30, 2015 at the Timpanogos Park 6th Ward Chapel, 955 North 300 East, Orem, UT. Friends may call at the Berg Mortuary of Orem, 500 North State Street, Wednesday from 6-8:00 p.m. and at the church Thursday from 9:30-10:30 a.m. prior to services. Interment will be in the Orem City Cemetery. Condolences may be sent online at www.bergmortuary.com.

Frank Landis Woodward passed away peacefully while surrounded by family on April 27, 2015. He was born July 30, 1939 in Heeney, CO to Leonard Andrew and Rhoda Mae Simpson Woodward. On May 15, 1959 he married Karen Damico. They lived in Springville,... View Obituary & Service Information

The family of Frank Landis Woodward created this Life Tributes page to make it easy to share your memories.