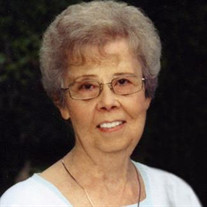 Frankie Fae Killpack Oldroyd, age 88, died in Provo, Utah on September 17, 2018, surrounded by her loving family. Frankie was born in Murray, Utah on September 7, 1930 to W. Frank Killpack and Zelma Van Leuven. She lived her first years of life in Baker, Oregon, moving to Provo when she was 3 years old. She has been a life-time Provo resident for over 85 years. Frankie loved to play the violin and piano, and was an excellent tennis player. She graduated from Provo High School in 1949; soon after that she became a secretary for the Head of Housing at BYU, and worked there for several years. On April 29, 1955, she married Herman “Bud” Oldroyd in the Salt Lake LDS Temple. Bud taught driver's education at Orem and Mountain View High schools for over 30 years. The family lived in Provo and eventually moved to Grandview Hill, where they raised 4 daughters. They were married for 55 years until Bud’s passing in 2010. Frankie was famous for her delicious cooking, especially her Sunday dinners. All were welcome and everyone ate very well. She loved making fancy desserts which were enjoyed by family and friends. She knew how to take care of a home and family, and was an expert at it. Frankie loved her family very much. Her children, grandchildren, and great-grandchildren were precious to her. Frankie was active in the LDS church and served in many callings throughout her life. She served as stake primary president for many years, and enjoyed her time as an ordinance worker in the Provo Temple. She is survived by her children, Terri Murphy (Patrick), Janet Augustus (Kevin), Nancy Ballif (Jeff), and Becky Cuell (Todd); 12 grandchildren, 4 great-grandchildren; and siblings, Marjorie Bushnell, Ruth Chappell, Lynn Killpack, and Gwen Webb. We would like to extend special thanks to the kind and gentle caregivers at Beehive Homes of Provo, who loved Mom as their own; and to Linda from ComfortWorx Hospice, whose compassionate guidance and love brought peace to all of us during Mom’s last days. You have all become so much more than friends and we will be forever grateful for your service. Funeral services will be held at 11:00 a.m., Friday, September 21, 2018 at the Grandview 17th Ward Chapel, 1122 Grand Avenue, Provo, Utah. Friends may call at the church on Thursday, September 20 from 6-8:00 p.m. and Friday from 10-10:45 a.m. prior to services. Interment, Provo City Cemetery. Condolences may be expressed at www.bergmortuary.com.

The family of Frankie Fae Killpack Oldroyd created this Life Tributes page to make it easy to share your memories.

Send flowers to the Oldroyd family.