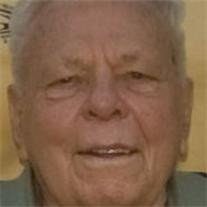 Fred Nuttall Giles, 96, died peacefully October 10, 2010 at Cove Point Retirement Center in Provo, Utah. He was born December 13, 1913 in Provo to Joseph Francis Giles and Clara Clarkson Nuttall. He married Mary Helen Hacking October 27, 1937 in the Salt Lake LDS Temple. He attended Provo schools and graduated from Brigham Young University in 1937 with a Bachelor Degree in the College of Applied Science. Following their marriage, Fred and Mary Helen moved to Wyoming. In 1943, Fred entered the US Army and served in Europe during World War II. He fought in the Colmar Pocket area of the Battle of the Bulge, and was awarded the Purple Heart on two different occasions and the Bronze Star. He was awarded a battlefield commission and honorably discharged as a first lieutenant in 1946. Following the war, Fred and Mary Helen homesteaded a farm in Heart Mountain, Wyoming, where he was instrumental in bringing electrical service to the area. In that role he served on the first board of directors of Tri-State Generation and Transmission Association in 1952. He was also influential in the creation of the University of Wyoming Northwest Center (now Northwest College) and served on its board of trustees. As an active member of the LDS Church, Fred's activities included executive and leadership responsibilities in many ward and stake organizations of the church. He was Bishop and a counselor of wards in the Big Horn and the Wind River Stakes in Wyoming. He served as a member of the High Council five times in four different stakes. He served in two branch presidencies. He was one of seven charter members of the Master M Men organization. Fred retired after working for the federal government for 38 years and a locally owned bank for 12 years. He and his wife served an LDS proselyting mission to Fort Lauderdale, Florida, from 1979 - 1980. Later in life, he served as an ordinance worker in the Vernal Utah LDS Temple. Fred thought the world had come to an end when his beloved eternal companion Mary Helen passed away in October 1982 and he found himself alone. Fred married Virginia Merkley Hacking, March 25, 1985 for time in the Salt Lake Temple. They enjoyed 13 years together in Wyoming and Utah before her death in 1998. He was an accomplished golfer, shooting a hole in one and winning several tournaments. He enjoyed gardening, hunting and fishing and spending time with his children, grandchildren and great-grandchildren. Survivors include four sons and a daughter: Joseph F. (Sue) of Sandy, Utah; Kent H. (Elizabeth) of Wabash, Indiana, Steven H. (Gaylene) of Hummelstown, Pennsylvania; Bradley H. (Janet) of Castle Dale, Utah; Mrs. Noel (Jeanette) Burke of Aurora, Colorado; sister-in-law Mrs. Floyd (Leora) Giles of Provo, Utah; twenty-two grandchildren; and thirty great-grandchildren. He was preceded in death by his parents, wife (Mary Helen), sisters; Mrs. Charles (Mary) Goodson, Mrs. James (Zelda) Schultz, and Mrs. Rex (Edna) Hickman; brothers; John F., Leonard, Joseph, and Floyd Giles; and son-in-law, Noel R. Burke. Funeral services will be held at 11:00 a.m., Friday, October 15, at the Provo 1st Ward Chapel, 100 East 200 South, Provo. Friends may call at the Berg Mortuary of Provo, 185 E. Center, Thursday evening from 6 to 8 p.m. and at the church from 10:00-10:45 a.m. prior to services. Interment will be at Provo City Cemetery. Condolences may be sent through www.bergmortuary.com or [email protected]

The family of Fred Giles created this Life Tributes page to make it easy to share your memories.

Send flowers to the Giles family.