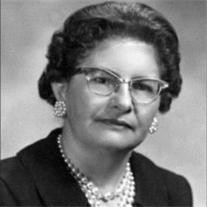 Freda (Jackson) Leckie, 95, passed away on Nov. 19, 2011 in Spanish Fork, Utah. Freda was born May 31, 1916 in Evanston, Wyoming, the third of twelve children born to Victor Orin Jackson and Ada (Rex) Jackson. She was raised on a farm south of Belfry, Montana on the Clarks Fork River. She attended school at both Belfry and Bearcreek and graduated from Belfry High School in 1935 along with her brother Clarence. While working in her father's meat shop/grocery store in Cooke City, Montana, she met and fell in love with a local miner, Alonzo William (Bill) Leckie. They were married in the fall of 1936 in Livingston, Montana and were blessed with seven children, 45 grandchildren, and 98 Great-grandchildren. After living four more years in Cooke City, and six years in Anaconda, the family moved to the Billings area, where Freda and Bill were residents for the next 48 years. After the death of her husband in1996, Freda moved to the Provo, Utah area for the remaining fifteen years of her life to be nearer to her children. Freda's family was her priority and her pride and joy. She loved being a mother and grandmother and would do anything to assist family or friends in need. She was a very giving person and had a good sense of humor, mixed with an occasional moment of feistiness. She loved cooking and baking, which she was talented at, and enjoyed sharing with family, friends, and neighbors. For years she was an active genealogist, teaching classes from time to time on family history and writing a book on the subject published in 1955. The lessons learned from growing up on the farm were never lost on Freda as she always nurtured lush flower gardens, along with bountiful vegetable and fruit harvests. The other most important aspect of Freda's life was her faith in God, and a diligence to pass that conviction on to her children and posterity. She was an active member of The Church of Jesus Christ of Latter-day Saints (Mormon) and served in many local and regional callings. In the early 1980's Freda and Bill served a full-time two-year mission to Western Canada. For several years before Bill died, they would spend their summers in Cooke City at the family property, and then "snow-bird" down south for the winter, visiting family along the way. Freda was preceded in death by her husband Bill, her parents, and five of her siblings: Rex, Clarence, Bill, Phyllis, and Dick. She is survived by six siblings: Mary, Ned, Alice, Carrol, Hope, and Jean. Also surviving are her seven children: Lon (Linda) of Covina, CA; Ron (Margaret) of Elk Ridge, UT; Dick (Deana) of Bowling Green, KY; Rita (Paul) DeBry of Provo, UT; Joe (Marilyn) of Meridian, ID; Scott (Jane) of New Harmony, UT; and Rilla (John) Hawkins of Spanish Fork, UT. 45 grandchildren and 98 great-grandchildren also survive Freda. The family would like to thank the Hearthstone for the loving care of their mother. Funeral services will be held at 1:00 p.m. Saturday, Nov. 26, 2011 at the Crosswinds 1st Ward Chapel, 1150 East 1240 South, Spanish Fork, UT. Friends may call at the church on Saturday from 11:30 until 12:45 prior to services. Interment and grave dedication will be in the Belfry, MT Cemetery at 11:00 a.m., Tuesday, Nov. 29, 2011. Condolences may be emailed through her obituary on www.bergmortuary.com.

Freda (Jackson) Leckie, 95, passed away on Nov. 19, 2011 in Spanish Fork, Utah. Freda was born May 31, 1916 in Evanston, Wyoming, the third of twelve children born to Victor Orin Jackson and Ada (Rex) Jackson. She was raised on a farm south... View Obituary & Service Information

The family of Freda Leckie created this Life Tributes page to make it easy to share your memories.

Send flowers to the Leckie family.