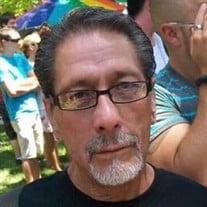 On August 13, 2019, a day where the skies were so blue you could almost see the heavens, John Frederick “Freddie” Corrales answered his angels plea to join them. Freddie (known as John to some) was born on June 29, 1948, in Provo, Utah to Joe and Cleo Corrales. He lived in Provo most of his life, but dedicated a big part of it in the middle to California. He was a big part of a very loving and generous family of which he contributed so much goodness to. He departed this world surrounded by his loved ones, just like he would have wanted. Freddie is survived by the unconditional love of his siblings: Ben (Marcia) Corrales and Mary (Juan) Ruiz; surviving uncles and aunts: Nina Dora Rivera of Durango Colorado, Tita Avena of Farmington, New Mexico, Johnny Salazar of Salt Lake City, Utah, and Johnny Corralez of Hemet, California; nieces and nephews: Lisa (Ponch) Corral, Ben (Heather) Corrales, Teresa (Chris) Hiatt, Tito (Joey) Ruiz, Stacey (David) King, and Mandi (Matt Smith) Humphries. He danced his way through the hearts of his family, his many great nieces and nephews, his dog Coco, and so many friends throughout the years. It didn’t take long after meeting Freddie that you would become a dear friend to him. He admired and looked up to his big brother, Ben, while always being there for his little sister, Mary. He was the type of man that would spend his last dime to help a friend in need. While being a proud member of the gay community, he was a very incredible partner to Marco and whoever had the privilege of being loved by him. Anyone close to Freddie would testify that he was someone who wanted nothing more than to give love and be loved in return. A Memorial Mass will be held at 9:00 a.m., Friday, September 6, 2019 at the St. Francis of Assisi Catholic Church, 65 East 500 North, Orem, Utah. A Rosary will be held at 8:30 a.m. prior to Mass. Interment, Provo City Cemetery. For the full obituary and to leave condolences for the family, go to www.bergmortuary.com. He is graciously joined in the heavens above by his beloved parents, nephew Andy Ruiz, along with many other close relatives and friends that he has missed for so many years. While the ones that love him the most are filled with so much heartache, we are all honored to celebrate the dash between the day he entered this world and the day he left it. We hope you are able to do the same. “Freddie was my brother, best friend and partner in crime. I will miss him forever.” - Mary Ruiz

The family of Frederick "Freddie" Corrales created this Life Tributes page to make it easy to share your memories.

Send flowers to the Corrales family.