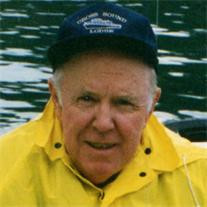 Fredrick Orral Huntington, aged 82, passed April 23, 2013 due to conditions incident to age. Fred was born July 28, 1930 in Springville, Utah to Orral Race and Golda Buell Huntington, the youngest of five children. He left home at sixteen to graduate from Provo High and attend some college at BYU. He married Carol Kuhni in the Manti Temple of The Church of Jesus Christ of Latter-day Saints on May 23, 1956. Together, Fred and Carol built and managed several noted motels in the region. Fred dedicated himself to his family in doing good, hard work. He never missed an opportunity to express his love for his wife, often crediting her as the good part of himself. His straightforward ethic earned him respect in his industry and the community. Fred is preceded in death by his parents, sisters Florence H. Bullock, Eileen H. Edwards, Helen H. Cheney, Donna H. Verrall and his dear grandson Christopher Wright. He is survived by his wife Carol as well as their two children Craig F. Huntington and Lori H. Wright, a special niece JoAnn B. Losee, and his seven grandchildren: Justin (Nichole) Huntington, Lacie (Daniel) Hadlock, Tayler Wright, Russel, Eric, Rachel, and Kevin. He also leaves the legacy of his great-grandchildren who became his great joy: Jaeden, Savanna, Joslynn, Genevieve, and Greyson. They knew him as Papa Bear. Special appreciation is expressed to the staff at Stonehenge Care Center. Graveside services will be held at 12:15 p.m., Friday, April 26, 2013, at the Provo City Cemetery, 610 South State Street, Provo, Utah. Friends may call at the Berg Mortuary of Provo, 185 East Center Street, from 10:30 a.m.-12:00 p.m. prior to services at the cemetery. Memories and condolences can be sent via Fred's obituary at www.bergmortuary.com.

The family of Fredrick Huntington created this Life Tributes page to make it easy to share your memories.

Send flowers to the Huntington family.