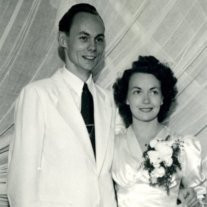 Freida Alice Neilson Wilkinson passed on to joyful reunions on October 19, 2013. She was born in Nounan, Bear Lake County, Idaho, on 15 March 1924, the daughter of Alma Edwin Neilson and Mary Kathryn Tippets Nielson. As a child, she lived in Star Valley, Wyoming, and in Bear Lake County, Idaho, where she attended the local schools. She was baptized a member of The Church of Jesus Christ of Latter-day Saints in 1932. Mom learned to read by the age of three and was a lifelong reader. She always enjoyed school, admired her teachers, and loved learning. She lost her mother to kidney disease when she was 13, and her father to heart disease and peritonitis when she was 21. When she was 18, Mom went to live in Ogden, Utah, to work at Hill Air Force Base. After her father’s death she moved to Phoenix, Arizona, then to Honolulu, where she met Frank Ray Wilkinson. They married in the Laie Hawaii LDS Temple on 6 May 1949. Soon thereafter, they pursued education and job opportunities to Michigan, Missouri, Utah, Pennsylvania, Virginia and London, Ontario, Canada. In 1980 they returned to Orem, Utah. They are the parents of 4 children, Steven Ray Wilkinson (Susan), of Pleasant Grove, Elizabeth Watkins (Richard) of American Fork, Barbara Wilkinson and Laurel Wilkinson, both of Orem. Wherever she lived, Mom served faithfully in the Church as ward organist, choir accompanist, and pianist in every organization and auxiliary, and as instructor, secretary and in presidencies of Primary, M.I.A., Sunday School, and Relief Society. Her interests have always included music, drama, art, and literature. She loved mystery novels, Jane Austen’s books, and the Metropolitan Opera. She was a ballet school pianist and also studied oil painting and interior design. Her musical ability is surely missed. Most importantly, she was a loving wife and mother, a homemaker, a beloved friend, and an avid genealogist. When Dad died in 1992, Mom’s courage and devotion witnessed her faith in the Lord’s Plan of Salvation and were a great strength to her family. She is with Dad again now, and with her parents, her sister, Lorna, and her brother, Max, whom she had no opportunity to know in mortality. She is survived by her son and 3 daughters, 9 grandchildren and 9 great-grandchildren. Graveside services will be held on Monday, 21 October 2013, at 2:00 p.m. in the East Lawn Memorial Hills Cemetery, 4800 North 650 East, Provo. A memorial service will be held on Wednesday, 23 October 2013, at 11:00 a.m. in the Geneva Heights 6th Ward Chapel, 570 North 900 West, Orem, Utah. Condolences may be sent to the family through www.bergmortuary.com. Funeral Directors, Berg Mortuary of Orem, (801)225-2131.

Freida Alice Neilson Wilkinson passed on to joyful reunions on October 19, 2013. She was born in Nounan, Bear Lake County, Idaho, on 15 March 1924, the daughter of Alma Edwin Neilson and Mary Kathryn Tippets Nielson. As a child, she lived... View Obituary & Service Information

The family of Freida Alice Neilson Wilkinson created this Life Tributes page to make it easy to share your memories.

Freida Alice Neilson Wilkinson passed on to joyful reunions on...

Send flowers to the Wilkinson family.