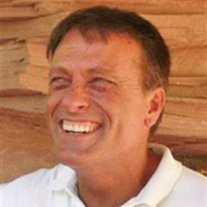 Fremont Leon Woodward, age 49, of Mapleton, passed away on November 13, 2013. He was born in Payson, Utah on February 27, 1964, the son of H. Leon and DeAnn Hawkins Woodward. Growing up in Mapleton, Utah, he attended Springville High School and served an LDS mission to Santiago, Chile. After graduating from Brigham Young University with a degree in Spanish Teaching, he spent many years teaching high school Spanish in Soda Springs, Idaho and Park City, Utah. Fremont married Rosemarie Jean Sonntag on November 25, 1988 in the Salt Lake Temple. They had three children, Chesney, Maika and Jeffrey. In 2001 and 2002 Fremont and Rosemarie made several trips to Haiti where they were eventually able to adopt two amazing boys, Jackson and Ricardo, who completed their family. Shortly after his mission, Fremont participated in the Big Brothers program and mentored a young man who became a cherished lifelong friend. He loved teaching and paid special attention to students who were struggling, becoming a mentor and friend to many whose lives he influenced for good. Several young men were able to serve LDS missions because of his encouragement and financial help. He had a strong drive to seek knowledge and deeper understanding of life and made it a priority to help others reach their potential. One young man related that Fremont taught him how to build a house, how to invest, how to run a business, and most importantly, taught him how to live a life based on true principles. After obtaining his contractor's license, he built many quality homes and taught a construction class for high school students through Mountainland Applied Technology College. A man of entrepreneurial talents, he excelled at many completely different types of employment, including electronics assembly, river guide, ski instructor, Youth Services mentoring, designing and drafting, real estate, retreat rentals, teaching, investing, motivational speaking, self-help housing programs, and owner of several business over the years. Some of his personal interests and abilities included gourmet cooking, singing, car mechanics, photography, mountain biking, anything chocolate, event planning, intricate fruit carvings, travel, and especially service. Fremont excelled at everything he tried. He will be dearly missed by his many friends, family, those whose lives he has impacted, and especially his children. "He's the bomb-diggity!" (awesomeness in its purest form). Fremont is survived by his parents, Leon & DeAnn Woodward of Mapleton; children: Chesney Marie Woodward and fiancé Kevin Barahona, Maika Kaye (Aaron) Virgin, Jackson Jacques Woodward, Ricardo André Woodward, and Jeffrey Nelson Woodward; former wife, Rosemarie Sonntag Woodward; siblings: Dana Hagio, Sidney (Rick) Wyland, Leslie (Spencer) Hansen, Kristy (Brett) Swanson, and Obnette Woodward. Funeral services will be held at 11:00 a.m., Wednesday, November 27, 2013 at the Spanish Fork East Meadows Ward Chapel, 1552 East 750 South, Spanish Fork, Utah. Friends may call at the church Wednesday from 9:30-10:45 a.m. prior to services. Interment, Spanish Fork City Cemetery. Condolences and memories may be posted on https://www.facebook.com/lovingmemoryoffremontwoodward, or at www.bergmortuary.com.

Fremont Leon Woodward, age 49, of Mapleton, passed away on November 13, 2013. He was born in Payson, Utah on February 27, 1964, the son of H. Leon and DeAnn Hawkins Woodward. Growing up in Mapleton, Utah, he attended Springville High School... View Obituary & Service Information

The family of Fremont Leon Woodward created this Life Tributes page to make it easy to share your memories.

Fremont Leon Woodward, age 49, of Mapleton, passed away on November...