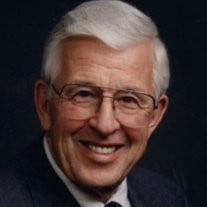 Our loving husband, father, grandfather, brother and friend passed away at the Lee Crest Care Center in Cardston, Alberta, Canada, on November 9, 2013. Wayne was born in Cardston on May 12, 1922 to Frank Reed and Fern Wood Smith. In 1942, Wayne bought his Mother's farm in Hill Spring, Alberta. He married Velora Allred in the Cardston Temple on October 3, 1944 and they spent the next 37 years in Hill Spring. In 1979, he and Velora moved to Utah. After nearly 47 years together, his loving wife, Velora, passed away. Wayne's children feel blessed that Sharon Gant came into his life and they were married December 14, 1991, in the Salt Lake Temple. Wayne was always very active in the LDS Church and enjoyed every opportunity for service that he had been given. Serving in the temple was one of Wayne's favorite things to do. No matter how busy things were on the farm, he always found a way to pause each week and attend the temple with Velora. His temple service continued into his late 80's. He loved to work and focused diligently on teaching each of his 7 children to work as they were growing up. He also loved to serve and was continually looking for those who needed uplifting in any way. He treasured his family and many friends second only to his Lord and Savior. Wayne is survived by his second wife, Sharon; her 3 children and 5 grandchildren; his 7 children: Max (Marilynn), Peoria, AZ; Mark (Diane), Hill Spring, Alberta, Canada; Merlin (Maureen), White Rock, BC, Canada; Vaughn (Sherry), Lethbridge, Alberta, Canada; Sharon (Mike) Weston, Victoria, BC, Canada; Connie (Roy) Olsen, Cardston, Alberta, Canada; and Kevin (Lori), Rio Rancho, NM; 32 grandchildren; 79 great-grandchildren; his brother Edward (Geraldine) and Floyd’s wife, Rula. He was preceded in death by his parents; first wife, Velora; brother, Floyd; and great-granddaughter, Anna Bevans. Funeral services will be held at 11:00 a.m., Friday, November 15, 2013 at the Pleasant Grove 12th Ward Chapel, 828 S. Locust Avenue, Pleasant Grove, Utah. Friends may call at the Berg Mortuary of Provo, 185 East Center Street, Thursday evening from 6-8:00 p.m. and at the church Friday one hour prior to services. Interment will be at the Provo City Cemetery. Condolences may be sent through his obituary at www.bergmortuary.com.

Our loving husband, father, grandfather, brother and friend passed away at the Lee Crest Care Center in Cardston, Alberta, Canada, on November 9, 2013. Wayne was born in Cardston on May 12, 1922 to Frank Reed and Fern Wood Smith. In 1942, Wayne... View Obituary & Service Information

The family of F. Wayne Smith created this Life Tributes page to make it easy to share your memories.