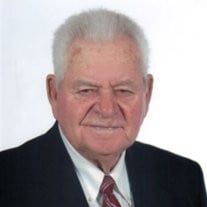 On New Year’s Day, Garth Ford passed away, surrounded by his family. He was born July 26, 1924 in Provo, Utah. At the age of 89, Garth accomplished in his lifetime more than what most people only dream of. He excelled in many sports throughout his life including baseball, football, track, golf and basketball. At the age of 16, he was asked to play for the semi-pro baseball team, the Provo Timps. Garth was drafted to the war in 1942 at the age of 18. He was in the Navy and was a radar man, first-class for more than two years on a landing craft infantry. This disrupted his baseball career, but when he got home, he picked up right where he left off. He later worked his way up through the ranks as a pitcher and signed Triple A contracts with four teams throughout his career. He received a signing bonus and a great salary from the Detroit Tigers, which he used to purchase Ford’s Locker Plant with two of his brothers. Garth managed the Locker Plant and a small café that they owned upstairs. He picked up the sport of golfing after learning in baseball that he didn’t get to hit near enough. He won tournaments all over including the Pro Am in 1964, Beat the Pro 1995 & 2002 and many more. He later retired from the Locker Plant. On May 27, 1948, Garth married the love of his life Marge. They had 5 children: Doug, Lori, Pam, Russell and Kim. His daughter Lori passed away at age 24 and this was one of the hardest times of his life. He enjoyed his family more than anything. He spent countless summers fishing Strawberry Reservoir, Russ’ property and the great rivers of Alaska with his family. He loved to hunt pheasants and elk. He shot his first elk at Birdseye in 2011. Garth and Marge both loved spending the winters in sunny St. George with their friends so they could golf year round. He is survived by his children: Doug (Carol) Ford, Pam (Steve) Wright, Russell Ford and Kim (Rick) Aller, 1 sister and 2 brothers. He leaves a great legacy of 10 grandchildren, and 5 great-grandchildren. He was preceded in death by his wife, Marge; parents; daughter, Lori Anderson; grandson, Brad Ford; sister and six brothers. Our family would like to give our thanks to Ale, Nik and Carrie and their families who gave Garth exceptional care. We would also like to thank the staff at Utah Valley Regional Medical Center Adult ICU for their care. Funeral services will be held at 2:00 p.m., Monday, January 6, 2014 at the Berg Drawing Room Chapel, 185 East Center Street, Provo, Utah. Friends may call at the mortuary Sunday, January 5, from 6-8:00 p.m. and Monday from 1:00-1:45 p.m. prior to services. Interment will be at the Provo City Cemetery. Condolences may be sent online at www.bergmortuary.com.

On New Year&#8217;s Day, Garth Ford passed away, surrounded by his family. He was born July 26, 1924 in Provo, Utah. At the age of 89, Garth accomplished in his lifetime more than what most people only dream of. He excelled in many sports... View Obituary & Service Information

The family of Garth Ford created this Life Tributes page to make it easy to share your memories.

On New Year’s Day, Garth Ford passed away, surrounded by his...

Send flowers to the Ford family.