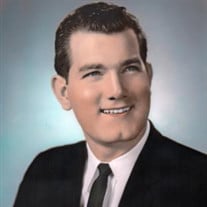 Gary Ray Thompson, age 82, from Orem, Utah died February 6, 2019. Gary was born September 18, 1936, in St. Anthony, Idaho to Blodwen Sarah West and Irwin Albert Thompson. Gary grew up in Cayucos, California where he worked at the family lumber yard and loved to play in the ocean. It was there on the coast where he learned to scuba dive and loved to hunt abalone. After graduating from high school, he joined the United States Navy and served his country in active duty for 20 years. During that time he achieved the rank of Lieutenant, and served in Vietnam, the Philippines, and Japan. While in the Navy, he attended the University of Utah where he met and fell in love with Kathleen LaVon Campbell. They married in the Salt Lake Temple on June 14, 1962. Upon retiring from the Navy, Gary became a member of the Navy League and joined the reserves. He returned to the University of Utah and obtained a Bachelor’s Degree in Computer Science, then went on to Brigham Young University to pursue a Master’s Degree. Gary and Kathleen eventually settled in Orem, Utah where they raised their children. He was a faithful member of The Church of Jesus Christ of Latter-Day Saints, and served in many callings from Sunday School Teacher to Branch President. Gary was always interested in computers, and spent his life building and programing computers for work and as a hobby. He worked for Eyring Research Center and Convergys. He loved music and had a beautiful tenor voice. He often told of the time he sang with the San Francisco Opera Company in their production of “Carmina Burana.” Besides his love for music, he also loved photography, movies, working on cars, traveling with his family, spending time in the outdoors, fishing, camping, and being with his grandkids. Gary is survived by his wife, Kathleen; his children, David, Rebecca Lopez (Ray), Michael (Merilee Tanner), Tamara Allen (Daniel), and Daniel (Jennifer Weight), and 17 grandchildren. He is also survived by his sisters, Dorothy and Kathy, and his brother, William “Billy.” He is preceded in death by his parents, his son, Joseph, and his sister, Barbara. Funeral services will be held at 11:00 a.m., Monday, February 11, 2019 at the Suncrest 3rd Ward Chapel, 90 North 600 West, Orem, Utah. Friends may call at the church from 9:30-10:45 a.m. prior to services. Interment, Provo City Cemetery. Condolences may be expressed at www.bergmortuary.com.

The family of Gary Ray Thompson created this Life Tributes page to make it easy to share your memories.

Send flowers to the Thompson family.