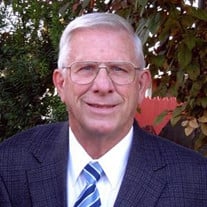 Gary Wilford Williams, age 82, of Provo, Utah, died on February 22, 2020, due to a lingering illness. Gary was born in Provo, Utah on June 26, 1937, to his parents Wilford (Bill) Leroy Williams and Myrtle Irene Beard. After the divorce of his parents, he was raised in the home of his grandparents, Wilford and Sarah Beard in Levan, Utah. His mother was re-married to Clarence J. Ligman, whom Gary considered as “dad.” He married Joyce E. Morris on November 8, 1956, in the Salt Lake Temple. They had four children: Sherrie W. Chynoweth Bills (Verl), Russell W. Williams, Troy G. Williams, and Linda W. Gause (Paul). Before retirement, Gary worked in fleet management at BYU and then Nu Skin for his last ten working years. Gary enjoyed hobbies such as fishing, hunting, camping, ATV riding, and model building. But for many years, he loved nothing more than having Joyce behind him while riding his Honda Goldwing motorcycle with the Temple Rider’s Association, where they traveled to temples throughout the United States and Canada. He served as the treasurer and secretary of the TRA for many years. Gary is survived by his wife and children, brother, Sherlan “Sweed” Ligman, ten grandchildren (Chelsea, Amberly, Meagan, Jed, Jake, Hanna, Jessica, Ryan, Bryce and Kylie), and ten great-grandchildren. Gary was preceded in death by his parents; sister, Shirley Arlene Williams Elder; son-in-law, Ken Chynoweth; grandson, Kody Chynoweth, and a great-granddaughter. Funeral services will be held at 11:00 a.m., Thursday, February 27, 2020 at the Berg Drawing Room Chapel, 185 East Center Street, Provo, Utah. Friends and family may call at the mortuary Wednesday, February 26 from 6-8:00 p.m. and Thursday, from 10-10:45 a.m. prior to services. Interment, Provo City Cemetery. Condolences may be expressed at www.bergmortuary.com.

Gary Wilford Williams, age 82, of Provo, Utah, died on February 22, 2020, due to a lingering illness. Gary was born in Provo, Utah on June 26, 1937, to his parents Wilford (Bill) Leroy Williams and Myrtle Irene Beard. After the divorce of his... View Obituary & Service Information

The family of Gary Wilford Williams created this Life Tributes page to make it easy to share your memories.