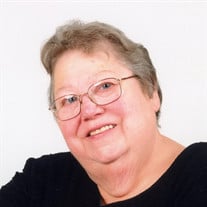 Gaye Garringer Schofield of Provo, Utah, passed from this life on her birthday, June 21, 2018. Gaye was born June 21, 1932 in Murray, Utah, the youngest child of Claud Orlando Garringer and Addie Sophia Swenson, each of whom preceded her in death. Four of her five older sisters Gwen White, Kenna Jorgensen, Chloe Harowitz, Velma Fisher, and her brother Dale Garringer each preceded her. She is survived by her sister, Inez Garringer Davis. When she was young, her grandmother told her she would marry a widower with half a dozen children. After graduating from high school, she worked for a time at Granite Junior High School. Later she accepted employment at the Los Alamos Scientific Laboratory in Los Alamos, New Mexico. There she met Aldred Edward Schofield, a widower with five children, aged 9 to 3 ½. They were married in the Salt Lake City Temple on October 4, 1956. They had three sons and with the five other children, together they built a large, happy family. Gaye is survived by each of the eight children: Elaine Beck, Provo, Utah; Anthony W. Schofield (Rebecca Rosecrans), American Fork, Utah; Jeanine Broxton (Harry Broxton), Provo, Utah; Susan Talley (Gregory Talley), Canyon, Texas; LaMont E. Schofield (Elaine Clinger), Orem, Utah; Lyle W. Schofield (Nola Weight), Provo, Utah; A. Lynn Schofield (Donna Cseke), Springville, Utah; and Samuel L. Schofield (Amy Boardman), Derby, Kansas. Gaye has 39 grandchildren, 105 great-grandchildren and 12 great-great-grandchildren. Gaye spent the early years of her marriage as a full-time homemaker, teaching, training and loving the eight children. When they were raised she returned to employment at the Los Alamos National Laboratory. After she and Aldred retired, they served missions for The Church of Jesus Christ of Latter-day Saints at the Denver Temple; at the Family History Center in Salt Lake City, Utah; at the Humanitarian Center in Salt Lake City, Utah; and in Taos, New Mexico. Gaye loved to sing and had a beautiful alto voice. She made and decorated countless wedding cakes. Applesauce cake with butter creme frosting was her speciality. She loved her large, active family and was proud of the accomplishments of each. She also valued her Mormon Pioneer heritage and was an active member of the Daughters of the Utah Pioneers. She was loved by all and she is sorely missed. Funeral services will be held Monday, July 2, 2018, at 11:00 a.m., at the Lakeside 1st Ward, 131 South 1600 West, Provo, Utah. Family and friends may call at Berg Mortuary, 185 East Center, Provo, Utah, on Sunday, July 1, 2018, between 6:00 and 8:00 p.m. or at the chapel before the funeral between 9:30 and 10:30 a.m. Interment will be at Utah Veterans Memorial Park, Bluffdale, Utah. Condolences may be expressed at www.bergmortuary.com.

Gaye Garringer Schofield of Provo, Utah, passed from this life on her birthday, June 21, 2018. Gaye was born June 21, 1932 in Murray, Utah, the youngest child of Claud Orlando Garringer and Addie Sophia Swenson, each of whom preceded her in... View Obituary & Service Information

The family of Gaye Garringer Schofield created this Life Tributes page to make it easy to share your memories.

Gaye Garringer Schofield of Provo, Utah, passed from this life...

Send flowers to the Schofield family.