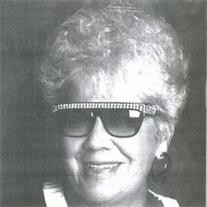 Genevieve Sudweeks Wall was born on Sunday, October 19, 1919 in Nephi, UT. She was the fifth child of eight children and the second daughter born to Richard and Flossy May Bowles Sudweeks. Gen said she remembered seeing a photo of herself as a child and her aunt commented to her about how she thought Gen was one of the most beautiful babies she had ever seen when she was born. The year before her birth, Gen's father had returned from a two-year mission and had built a new house the following summer. Her family at the time (her parents and siblings – Nello, Irene Orus and Raymond) lived in the house for only two weeks before Gen was born. She was also blessed by her father at the age of two weeks old. Her younger siblings (Verl, LaRue, and Beverly) later joined them. Two weeks before Gen turned eight, the first "talking" feature film, The Jazz Singer, was released (in October 1927). Gen was baptized at 8 ½ years old on April 1, 1928 (April Fools' Day). When she was a teenager, Gen attended a dance in a neighboring town, where she met the love of her life, Sherman Albert Wall. It's interesting that her parents also met for the first time at a dance. Her mother was about twenty years old, and her father was a recent widower of his first wife, Selena, who died after giving birth to his oldest son, Ivor. Richard and Flossie ended up getting sealed in the Manti Temple three years later. Gen and Sherman were married on September 20, 1938 (a month before Gen's nineteenth birthday), and they were also sealed in the Manti Temple a year and a half later. Sherman was from Santaquin, and they lived there for about fifteen years after they were married, along with three of their four boys (Sherman Jr., Michael and Merrill).. The boys were actually born in Provo, except for Sherm who was born in Payson. The family moved to Provo in about 1954, where Gen's youngest son, Jeff was also born. Gen and Sherman were married for a little over 52 years before he passed away at the age of 75 on December 23, 1990 (almost 20 years ago). Gen wrote a Relief Society Newsletter spotlight about herself in 1998, 12 years ago. Here is an excerpt from that: "I was born and raised in Nephi, Utah. I lived in Santaquin fifteen years after I was married. We moved to Provo in 1954, so I've been in Provo 1st Ward a long, long time. I've seen lots of young couples come and go. I have four sons and their families. What a joy they are to me every day. Just last weekend my grandson, Kody, married a girl whose parents lived in the Provo 1st Ward when they were newlyweds, thirty or so years ago. My sister said I should write a book about all of the things that have happened in my life. We have rental homes on this block (200 East), and we used to call it "Wall Street". At one time I had a couple that lived in one of our houses…and (found out later) he had high jacked an airplane, jumped out over Provo and had half a million dollars in the back bedroom. –Well, I always thought "I am never going to get old' Ha! Ha! See how much good it did me." She was 79 then. Little did Gen know that she would live to celebrate her 90th birthday and that she would live to be older than either of her parents did. Her father died at the age of 82 in January 1965, and her mother passed away almost 9 years later at the age of 85 (in Oct 1973). All of Gen's boys are now married men with beautiful families. Gen has eight grandchildren, 23 great-grandchildren and six great-great grandchildren (as of a year ago, *see details below). Gen helped many people by teaching, leading and giving service for years, from Primary-aged children to adults. She has taught the gospel by her example and by sharing her own experiences, doing genealogy and temple work, spending time with people, providing delicious food/sharing recipes, babysitting and giving countless hour of other service, and especially sharing her wit and fun personality throughout the years. She has 4 children, 8 grandchildren, 23 great-grandchildren with a couple more on the way, 6 great-great grandchildren – as of October 2009. Funeral services will be held at 11:00 a.m., Tuesday, August 17, 2010 at the Provo 1st Ward Chapel, 195 South 100 East, Provo. Friends may call at Berg Mortuary of Provo, 185 East Center, Monday evening from 6 until 8 and at the church Tuesday from 9:30-10:45 a.m. prior to services. Interment, Provo City Cemetery. Condolences may be sent to the family through www.bergmortuary.com or [email protected]

Genevieve Sudweeks Wall was born on Sunday, October 19, 1919 in Nephi, UT. She was the fifth child of eight children and the second daughter born to Richard and Flossy May Bowles Sudweeks. Gen said she remembered seeing a photo of herself as... View Obituary & Service Information

The family of Gen Wall created this Life Tributes page to make it easy to share your memories.