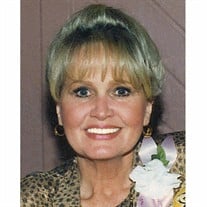 Geraldine "Gerri" Hochstrasser Engemann peacefully passed away in her sleep on Sunday morning, February 13, 2022, from causes incident to age. The daughter of Gerald Dean Hochstrasser and Ora Ione Jackson Hochstrasser was born on June 21, 1934, in Driggs, Idaho. She was the youngest and only child of a blended marriage that produced eight other half brothers and sisters, four from widowed Dean’s marriage (Rodney, Veloy, Nephi Benjamin, Dale) and four from Ora’s prior marriage (Alice, Helen, Donna, Reed). The Hochstrasser family moved from Driggs, ID to an Orland, CA small ranch when Gerri was barely one year old. Her father, Dean, was a rugged western type who raised some cattle and small crops and made the bulk of his income as a champion sheep shearer, traveling from ranch to ranch during the shearing season, while Gerri’s mother, Ora, was a lovely, gentle type who worked as a practical nurse to supplement the family income. Gerri attended Orland elementary schools through the 8th grade. Her parents divorced when she was in the 9th grade, and she moved with her mother to the San Francisco Bay area where greater opportunities existed for practical nurses. There Gerri attended and graduated from Balboa High School where she was highly popular, excelled in voice, music, and drama and made many life-long, close friends. Following her graduation from Balboa in the spring of 1952, she enrolled at Brigham Young University in the fall where she continued to develop her musical talents as a member of The Student Program Bureau under the tutelage of Program Director Janie Thompson. When the top dance bands and small musical combos in the area were made aware of her vocal talents, she was quickly hired as a vocalist for numerous engagements, helping her with much needed school expense money. This experience would eventually lead to her working and touring the world utilizing her beautiful voice. After a successful and enjoyable freshman year at BYU, she returned for her sophomore year in the fall of 1953 when she met her future husband Paul (Karl) Engemann, himself just having enrolled at BYU through the G.I. Bill with points earned during his service in the U.S. Army. Following their marriage in June 1954, with Karl focused on earning a degree, Gerri began working as a bookkeeper for Nate Morgan Jewelers in Provo, as well as a secretary for Dr. Hyrum Babcock, Principal of what was then the BYU Training School on lower campus in the same historical building later beautifully renovated and designated now as the Provo City Library. After the Winter Quarter in 1957, as her husband completed all necessary classes to graduate with the Class of ’58, she and her husband headed for Los Angeles early with their 2-month-old son, Paul, to establish a home and find work. Gerri worked diligently and was successful in establishing herself in the Hollywood entertainment industry as a first-call studio vocalist and vocal contractor, working at all the major and secondary recording, television, and film studios. Her vocal work included doing motion picture soundtracks, television shows, radio and television commercials, and recording session backup vocals for major recording artists such as Elvis Presley, The Righteous Brothers, Frank Sinatra, Barbra Streisand, Neil Diamond, Bob Dylan, Fankie Laine, Wayne Newton, and a plethora of unknown artists seeking fame and fortune. Gerri continued to receive residual payments from across the world for her performances on film soundtracks such as Guess Who’s Coming to Dinner, Camelot, Funny Girl, Hello Dolly, Doctor Doolittle, How to Succeed in Business Without Really Trying, and The Great Bank Robbery. She became a regular backup vocalist for The Hollywood Palace Television studio, working on, among other productions, The King Family Show, and was called on to substitute as “Cousin Gerri” for one of the King Sisters during a three-week Alvino Rey Orchestra and The King Sisters engagement at The Tropicana Hotel in Las Vegas, which she describes as perhaps her most enjoyable experience as a singer. Ray Conniff asked Gerri to join his Ray Conniff Singers recording and concert touring group as a featured singer, stepping up to do duet vocals with Ray. Working with Ray took her to many countries and a performance at The White House. She also sang backup for The Osmond Family during two international tours, which she also considered a highlight during her career. She toured for two and a half years as a principal member of the original cast of Lex de Azevedo’s and Doug Stewart’s highly successful musical Saturday’s Warrior, creating the role of Mother Flinders. Gerri is survived by her husband of 67 years, Karl; children: Paul (Suzanne), Shawn (Larry d.), Shannon (Jim), Ryan (Emily), and Bret (Demi); grandchildren: Danny (Tilly), Austin (Ellee), Dallen, Chance, Hayden, Cannon, Isabelle, Rome, Adam, Cole, Gavin, and Maude; and great grandchildren: Liam, Olivia, and Lilly. Funeral services will be held at 11:00 a.m., Saturday, February 26, 2022 at the Summit Ward Chapel, 4200 North Foothill Drive, Provo, Utah. Friends may call at the Berg Mortuary of Provo, 185 East Center Street, Friday, February 25, from 6-8:00 p.m. and at the church Saturday, from 9:30-10:45 a.m. prior to services. Interment will be at Eastlawn Memorial Hills, 4800 North 650 East, Provo, Utah. Condolences may be expressed at www.bergmortuary.com. The family of Geraldine “Gerri” Hochstrasser Engemann has invited you to view the webcast of their loved one’s service. This webcast will take place on Saturday, February 26, 2022 at 11:00 a.m. http://www.bergmortuary.com/obituaries/permalink/10381936/LTWebcast (Live stream is ONLY available during service)

The family of Geraldine "Gerri" Hochstrasser Engemann created this Life Tributes page to make it easy to share your memories.

Send flowers to the Engemann family.