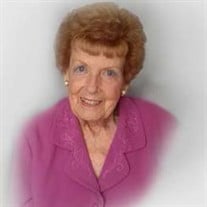 Geraldine “Gerrie” Anderson Bills was born May 5, 1930 to Cyril and Inez Anderson in Provo, Utah, and passed away at the age of 89 on November 6, 2019 in Lindon, Utah. Gerrie married DeLoyal Bills on August 28, 1952 in the Salt Lake City Temple. They had two children: Lesa (Glenn) Gunn, Springville, UT, and Darren (Debbie) Bills, Maple Valley, Washington. Gerrie is survived by both of her children; brother, C. Richard Anderson; sister, Sandra Anderson Whitby; 11 grandchildren, and 18 great-grandchildren. She is preceded in death by her husband, DeLoyal Worthington Bills. Gerrie leaves behind a legacy of love and learning. Even as a child, Gerrie always knew that she wanted to be a teacher; from 1948-1952 she attended BYU where she received her Bachelor’s degree in Speech and Drama with a minor in French. After graduating, she worked at Pleasant Grove High for 4 years where she taught English, History, Speech, and Drama. Gerrie loved teaching at the high school and especially loved putting on plays. She not only directed the high school plays, but other summer-time productions as well. She genuinely loved her students and those she worked with, and created lasting relationships that she maintained throughout her life. In 1959, Gerrie moved to Salt Lake City with DeLoyal, where for the next several years Gerrie enjoyed staying at home raising her children. Whether it was making Lesa’s dance costumes or helping Darren with his homework, she continued to show her love and support for her family. In the mid 60’s, Gerrie returned to her career in teaching until 1971 when she resumed staying at home with her children. In 1979, Gerrie went back to school and obtained her Master’s in education with an emphasis in adult reading. After 5 years, she completed her Master’s while teaching as an English professor and working as a counselor for the Lambda Delta Sigma sorority at UVSC (now UVU). Gerrie was a devoted member of The Church of Jesus Christ of Latter-day Saints, serving in various capacities including Primary President, Stake Young Women’s President, and in the Relief Society. In 1998, Gerrie began a service mission with her sweetheart, teaching at the Missionary Training Center (MTC) in Provo, Utah. They gave this service together for just over a year when DeLoyal got sick and passed soon after in March of 2000. After his death, Gerrie continued her church service at the MTC off and on until 2007. She even began hosting a Book of Mormon book club that has met together for almost 20 years. Gerrie loved her grandchildren and great-grandchildren, often telling visitors the family updates as they watched her regularly updated digital picture frame in the family room. Her grandchildren have fond memories of traveling with and being spoiled by their Grandma Bills. From audio tapes of her reading books, to whipping up a perfect batch of “Grandma’s Toast” on a Sunday evening, Gerrie made every effort to be a part of her grandchildren’s lives. In her later years, Gerrie suffered from daily chronic pain. While this pain could be debilitating at times, it was important to Gerrie to continue to try. When asked about her life she would often comment that she had tried to be a good mother/grandmother/great-grandmother, she had tried to be good member of the Church, and she had tried to be a good person despite her circumstances. Her attitude of “I’ll try” is a shining example for all of those that know and love her; and together we know that she accomplished all that she hoped for and more. Funeral services will be held at 11:00 a.m., Wednesday, November 13, 2019 at the Grandview 15th Ward Chapel, 1122 Grand Avenue, Provo, Utah. Friends may visit with the family at the church Tuesday, November 12, from 6-8:00 p.m. and Wednesday from 10-10:45 a.m. prior to services. Internment will immediately follow at the Timpanogos Memorial Gardens Cemetery in Orem, Utah. Condolences may be expressed at www.bergmortuary.com.

The family of Geraldine "Gerrie" Anderson Bills created this Life Tributes page to make it easy to share your memories.

Send flowers to the Bills family.