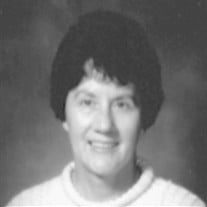 Geraldine Hebdon Roos "Jeri" passed away on October 5, 2014. She was born to Daisy Bauer and James Orien Hebdon in Salt Lake City, Utah. Jeri loved her family dearly and would do anything for any of them. She graduated from Granite High, and then went on to Brigham Young University for two years and then graduated from the University of Utah. She was a member of Phi Kappa Phi Honor Society. She married Keith L. Roos in the Salt Lake LDS Temple. Jeri taught school in Houston, Texas and in schools in the Salt Lake, Granite, Jordan, and Alpine School Districts. She spent the last fourteen years of her career teaching at Cascade Elementary and was a Music Specialist. She was PTA President of Rock Canyon Elementary School and on the Provo City PTA Board. She served in the South German Mission of The Church of Jesus Christ of Latter-day Saints. She is a former member of the Mormon Tabernacle Choir, and sang with the Houston Opera and the Timpanogos Chorale. She was an ordinance worker in the Provo Temple, a volunteer in the Bountiful Temple, and served as a guide on Temple Square. She is survived by her children Mark (Larendee) of Brooklyn, NY; Bryan (Julie) or Redmond, WA; Laura (Brett) Albuquerque, NM; brothers Douglas (Yvonne) of Mesquite, NV; Kent of Sandy, UT; brother-in laws Ray Alexander of Layton, UT, sister-in law Beverly Hebdon of Holladay, UT, thirteen grandchildren; and twenty-seven nieces and nephews. She was preceded in death by her husband; her parents; brother Blaine Hebdon, and sisters Carol Alexander, Marilyn Bingham, Bonnie White, brother-in law David White; grandsons Jackson Roos and Shawn Hansen, and niece Cindy Hebdon. Per her request there will be no formal viewing but family and friends may attend her memorial service at the Berg Mortuary of Provo, 185 East Center Street, Saturday, October 25 at 11:00 a.m.. Interment will be the Provo City Cemetery.

Geraldine Hebdon Roos "Jeri" passed away on October 5, 2014. She was born to Daisy Bauer and James Orien Hebdon in Salt Lake City, Utah. Jeri loved her family dearly and would do anything for any of them. She graduated from Granite High, and... View Obituary & Service Information

The family of Geraldine "Jeri" Hebdon Roos created this Life Tributes page to make it easy to share your memories.

Send flowers to the Roos family.