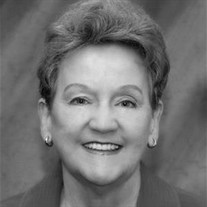 Geraldine Callister Oettli, beloved daughter, sister, wife, mother, grandmother and friend, passed away peacefully at home on November 7, 2018. Geri was born in Tremonton, Utah, February 14, 1936, the fourth daughter of wonderful parents, Thomas Leonard and Hannah (Carrick) Callister. Geri spent most of her growing up in Spanish Fork, Utah, where she made life-long friends, excelled in school and performed in countless pep rallies and half time shows as a cheerleader. Geri was born in the middle of the depression, but it was the MGM classics, fabulous forties show tunes and iconic fifties style that punctuated her youth and indelibly etched her heart. Geri graduated from Brigham Young University before pursuing an advanced business degree at the Harvard-Radcliff Program in Business Administration. Geri was decades ahead of her time as she ventured a career with IBM’s Data Processing Division in Boston and Salt Lake City. She helped program the RAMAC—the first commercial computer that used a moving-head hard disk drive for secondary storage. After it was said of her time and again that she “never did marry,” Geraldine met her eternal sweetheart, A. Scott Oettli, in Cambridge, Massachusetts. Scott was serving in the New England States mission while Geri was attending Radcliff. Scott had to court Geri for a few years before she agreed to marry him on June 17th, 1963, in the Salt Lake Temple. The happy couple spent their early married life in Santa Monica, California, where their first child, Matthew Scott, was born. Then, in 1965, they bought their first home in Encino, where they stayed for 25 years. Less than 20 months after Matt’s birth, Geri gave birth to twins, Mary Ann and Mark Callister. Geri oft repeated that she never felt happier nor more fulfilled than as a young mother to essentially three babies at once. Geri was an amazing homemaker, and not only did it all, but did it all seemingly effortlessly. She cooked and baked from scratch, sewed, gardened, canned, chauffeured, score kept for Encino Little League, volunteered in PTA and scouting, and served in about every leadership and teaching position in The Church. Eventually, Geri returned to the paid work force and earned 1982 Top Salesperson at Computerland, the retail store where she taught unsuspecting individuals why they might want to have a computer in their home for personal use. Geri also taught business classes at Los Angeles Valley Community College. Scott and Geri relocated to Utah in 1990, and the following year, they served full time in the Virginia Roanoke Mission for The Church of Jesus Christ of Latter-day Saints. They labored primarily within the tight knit communities of the Eastern Shore, and made forever friendships as they taught the restored Gospel of our Savior, Jesus Christ. While maintaining residence in their Provo home, Scott and Geri served two additional missions for The Church, first in the Employment Center and later in the Family History Library at BYU. Never one to retire, Geri taught at Independence High in Provo, and volunteered countless hours with Project Read, an adult literacy effort. Geri was also an active member of Republican Women and the Literary League. She loved her friends in the Riverside Ward and never missed the annual salmon fry or the 24th of July parade around the Marrcrest Circle. Family was everything to Geri, and she delighted most in being a grandma. She and Scott traveled frequently across the country and sometimes out of the country to keep up with their grandchildren. Never mind their historically conservative ways, as grandparents Geri and Scott knew no bounds. Though Alzheimer’s robbed Geri of much in the last years of her life, she was never more loved and admired than as someone who could, at last, be the recipient of service instead of the giver. In the throes of the disease, Geri’s love for children−especially her 6 “greats”−was so evident, as was her spiritual core. Geri read the entire volume of Jesus the Christ when she did not know what day of the week it was. She highlighted and re-highlighted her well-worn scriptures, which embody Geri’s legacy of faith along with her posterity. Geraldine is survived by her children, Matthew Scott (Ramona) Oettli of North Canton, Ohio; Mary Ann (Greg) Pearson of Provo, Utah; Mark Callister (Aimee) Oettli of Richmond, Texas; 12 grandchildren; 6 great-grandchildren; her sister, Janette Hales Beckham of Provo, Utah; her sister-in-law, Toni Lee Peterson and brother-in-law, Roger R. Oettli, both of Draper, Utah. Funeral services will be held at 11:00 a.m., Saturday, November 24, 2018 at the Berg Drawing Room Chapel, 185 East Center Street, Provo, Utah. Friends may call from 9:30-10:50 a.m. prior to services. Interment, Monday, November 26, 2018 at 9:00 a.m., Provo City Cemetery. Condolences may be expressed at www.bergmortuary.com. The family of Geraldine Oettli sincerely thanks the angels from Elevation Hospice and Aspen Senior Care, whose exemplary efforts and support transformed the last months of our mother’s life into a time we will treasure forever.

The family of Geraldine Callister Oettli created this Life Tributes page to make it easy to share your memories.

Send flowers to the Oettli family.