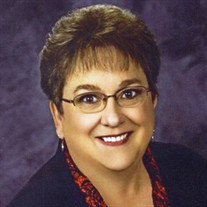 Geralyn passed away suddenly on Thursday, November 26th, 2020 due to a brain hemorrhage. Geralyn was born July 2nd, 1954 in Deming, New Mexico; the oldest daughter of seven children born to Marvin L. and LaFlorence B. Jones. She treasured her youth, growing up in the small close-knit L.D.S. farming community of Virden, New Mexico. She remained connected to friends and extended family from that valley as they had a very strong bond going back several generations from L.D.S. pioneers. The seminary class of 1972 was united in "fun" activities all through high school as their testimonies grew. After graduating from Duncan HS in Arizona in 1972, she started at BYU that fall majoring in Clothing and Textiles. The next fall, Keith Powers showed up in her same ward and after several attempts to date her she finally agreed and a year or so later they were married in the Provo Utah Temple on April 22nd, 1975. She graduated with a Bachelor of Science degree in April of 1976. Geralyn loved learning and studying a variety of topics especially the gospel and people in history who had to deal with tragedy and overcoming trials, which helped her to be sensitive to others. She loved to listen to gifted speakers who built her faith; and of course she was a student of all things related to quilting. Geralyn had many talents and special gifts of the heart. She loved to teach and be with young people. She served in The Church of Jesus Christ of Latter-day Saints in numerous teaching and leadership callings. Her passions were the creative arts. She painted for many years and then rekindled a love for quilting. She was known for her knack of blending colors to create beautiful quilts. Geralyn designed her own patterns and taught classes in various towns in at least four states. She eventually acquired a "long-arm" machine and that opened a new pathway to satisfaction. The quilting world brought her much joy. She has also been on television and authored a book of her own quilt patterns. Her family is the most significant part of who she is. After six years of marriage, Heavenly Father literally handed them their two children. Brett Warren was born in August of 1981 and Courtney Lane was born in February of 1985. They raised our family in the small rural community of Lyman, Wyoming. Again the bonds created there strengthened us. Our extended family and the bi-annual reunions of the Jones family for the past forty years brought fun and laughter and some tears and memories for all. Geralyn was loved as one of the "beloved aunts" in the family. After the kids were in school full time, Geralyn needed to get out of the house so she became a school para-educator. She has a gift for connecting with special needs children who brought her much joy. She loved them unconditionally. Many comments have been shared through media which explain how she affected others: she was genuine, sincerely listened to others, sensitive to pain in life, an encouraging teacher, dedicated to serve people, and gave insightful comfort when asked, she is committed to Jesus Christ and strived to live up to her covenants. Her mission in life was to constantly build Faith, Hope and Charity in herself and others. Geralyn is survived by her husband, Howard Keith Powers; daughter, Courtney Lane Powers; son, Brett Warren Powers (Daleina); grandchildren: Freedom Champion, Gunner Champion, Joaquin Powers, Dawson Powers and Gavin Powers; almost forty nieces and nephews and approaching one hundred great nieces and nephews. Also her siblings: Mike, Marshall, Terry Ann, Pamela, Rodney and Alan and her mother, LaFlorence B. Jones. Her father Marvin L. Jones left this life in May of 2017. Funeral services will be held at 11:00 a.m., Wednesday, December 2, 2020 at the Timpview 5th Ward Chapel, 865 West 1000 North, Orem, Utah. Friends may call from 9:30-10:45 a.m. prior to services. Interment will follow at Timpanogos Memorial Gardens, 1000 North 400 East, Orem, Utah. “…Endings are not our destiny. The more we learn about the gospel of Jesus Christ, the more we realize that endings here in mortality are not endings at all. They are merely interruptions--temporary pauses that one day will seem small compared to the eternal joy awaiting the faithful…” Elder Dieter Uchtdorf April 2014

Geralyn passed away suddenly on Thursday, November 26th, 2020 due to a brain hemorrhage. Geralyn was born July 2nd, 1954 in Deming, New Mexico; the oldest daughter of seven children born to Marvin L. and LaFlorence B. Jones. She treasured her... View Obituary & Service Information

The family of Geralyn Jones Powers created this Life Tributes page to make it easy to share your memories.

Send flowers to the Powers family.