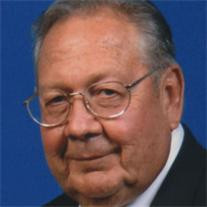 Glade H Brereton, 80, of Orem, passed away surrounded by loved ones on Friday, December 10, 2010 in Provo after a short illness. He was born February 5, 1930 to Morris A. and Opal Brereton in Provo, Utah. He grew up in the Edgemont area of Provo and attended Page Elementary and Lincoln High Schools. He married his high school sweetheart, Belva Gene Rasmussen, on July 7, 1950. They were later sealed in the Salt Lake Temple. He was a High Priest in the Sharon 5th Ward. He showed his love for the Savior through his many acts of kindness. Glade worked as a carpenter in the open hearth of Geneva Steel for 38 years. He was a gifted craftsman and built and remodeled many homes in the area. He possessed a love for the out-of-doors and was an avid gardener. He loved nothing more than to be outside working in his yard and garden. Family and friends could always expect a share of the harvest. In 2009, he was honored to receive the Orem City Beautification Award. Some of his favorite times were fishing with family and friends at Strawberry Reservoir. He loved BYU Football. He was true blue through and through. After retiring from Geneva, Glade and Belva enjoyed many winters in the Yuma, Arizona area and made many long lasting friendships there. Glade is survived by his wife, Belva, Orem; their three children: Debra (Robert) Davis, Katy, Texas; Scott (Karen) Brereton, Orem; Diane Brereton, Orem; and six wonderful grandchildren: Nathan, Phil, Ryan, Jen, Lauren and Adam who think he is the greatest Grandpa ever. He is also survived by seven siblings: Maurine B. Pulley, Salem; Garn (Karma) Brereton, Orem; Grant (Donna) Brereton, Orem; Ron (Shirley) Brereton, Orem; Norman Brereton, Provo; Karen Brereton, Springville; Sharlyn Smith, Apopka, Florida. Funeral services will be held on Friday, December 17, 2010 at 11:00 a.m. at the Sharon 5th Ward Chapel, 545 South 800 East, Orem. Family and friends may call at Berg Mortuary of Provo, 185 East Center Street, Thursday evening from 6:00 to 8:00 p.m., and at the church Friday morning from 10:00 to 10:45 a.m. prior to services. Interment will be at the East Lawn Memorial Hills Cemetery. Condolences may be sent to the family through www.bergmortuary.com.

Glade H Brereton, 80, of Orem, passed away surrounded by loved ones on Friday, December 10, 2010 in Provo after a short illness. He was born February 5, 1930 to Morris A. and Opal Brereton in Provo, Utah. He grew up in the Edgemont area of Provo... View Obituary & Service Information

The family of Glade Brereton created this Life Tributes page to make it easy to share your memories.

Glade H Brereton, 80, of Orem, passed away surrounded by loved...

Send flowers to the Brereton family.