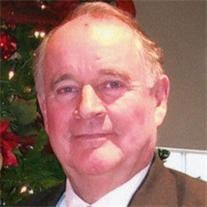 Glade Melvin Terry, 79, of Provo, beloved husband, father and grandfather, died peacefully Thursday, May 16, 2013, in Heber, Utah. He was born May 7, 1934, in a log cabin in Pleasant Grove, Utah. He is the youngest of seven children born to Joseph Alphonzo and Kate Burch Terry. He married Elaine Caras. They later divorced. He married Kairle Dawn Jensen on March 4, 1965, in Provo, Utah. Their marriage was solemnized in the Provo LDS Temple on February 14, 1981. Glade grew up in Provo, Utah where he attended Maeser Elementary, Dixon Jr. High and graduated from Provo High School. Glade dedicated his life to serving others. He served as a member of the Provo Police Department for 30 years. Glade loved police work, serving others, and his community. At the police department he especially enjoyed the position of patrol sergeant. It was an assignment where he could be out in the city, but also instrumental in assuring the fairness and quality of the officers that he was supervising. On the side, he hung draperies for many years for Dixon Taylor Russell, Taylor Brothers and Zion Upholstery. Glade was a member of the Utah Valley Old Car Club. He and his family enjoyed the parades and dust-off tours each year, traveling in his 1926 Model T Ford. He also enjoyed camping with friends and family, which started in tents and ended in a diesel pusher motorhome. Glade organized a travel group that went to Mexico at Christmas time with clothes and necessities that were given to the needy. He often said that he had traveled to Mexico 37 times. After retirement, Glade and Kairle served four missions for The Church of Jesus Christ of Latter-day Saints in Montevideo, Uruguay; Kirtland, Ohio; and twice at Heber Valley Camp. Glade will be fondly remembered by family, friends and neighbors for his concern and generosity in times of need. He could fix just about anything and had any tool that you might need. His favorite outing was to Harbor Freight, though he had more tools than they did. Survivors include his wife, Kairle; eight children: Teresa (Ron) Talbot, Brian (Robyn) Terry, Karl (Cheryl) Radmall, Alan (Tracy) Radmall, Kairle Ann (John) Oaks, Susan (James) Green, Craig (Cindi) Terry, and Don (Karrey) Terry; 41 grandchildren; 30 great-grandchildren; three siblings: Alene Rowley, George Terry, and Hilton Terry. He was preceded in death by his parents; son, Jeffrey Terry; and three siblings: Norma Cluff, Frank Terry and Frances Rowley. Special thanks to Craig, Cindi and their children, and the doctors, nurses and staff at Heber Valley Medical Center for their loving care during his final weeks and hours. Funeral services will be held at 11:00 a.m., Monday, May 20, 2013 at the Bonneville 10th Ward Chapel, 1498 East 800 South, Provo, Utah. Friends may call at the Berg Mortuary of Provo, 185 East Center Street, Sunday from 6-8:00 p.m., and at the church Monday from 9:30-10:45 a.m. prior to services. Interment at East Lawn Memorial Hills. Condolences may be sent through his obituary at www.bergmortuary.com.

Glade Melvin Terry, 79, of Provo, beloved husband, father and grandfather, died peacefully Thursday, May 16, 2013, in Heber, Utah. He was born May 7, 1934, in a log cabin in Pleasant Grove, Utah. He is the youngest of seven children born to... View Obituary & Service Information

The family of Glade Terry created this Life Tributes page to make it easy to share your memories.

Send flowers to the Terry family.