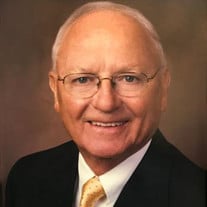 Glen Chester King, age 86, peacefully passed away Saturday, March 3, 2018 in Provo, Utah. He was a loving and devoted husband, father, grandfather, great-grandfather and friend. His values of hard work, integrity, humility, honesty and compassion blessed and strengthened everyone in his circle of influence including his children, family, friends and business associates. Glen was born on October 13, 1931 in Ogden, Utah to Chester Alonzo and Lucy Wallace King. Glen was raised on a farm in Kaysville, Utah and learned the value of hard work early in his life. By the age of six he had learned to milk dairy cows, ride horses, and tend sheep. He raised and entered many prize animals in the Utah State Fair and the North Salt Lake Stock Show, winning several blue ribbons. He served an LDS mission from 1949-1951 in the Central States Mission, spending most of his time in Missouri. Following his mission, he studied at Brigham Young University where he met his sweetheart and eternal companion, Joanne Shaum. They were sealed in the Salt Lake Temple on August 26, 1955. Glen and Joanne worked together to raise three boys, Greg, Kevin and Scott. After graduating from BYU with a B.S. in Business and Economics, Glen began a successful career in finance, specializing in securities. He became a manager at J.A. Hogle & Co. and Goodbody & Co. He later retired from Merrill Lynch & Co., where he was a manager and vice-president. An active and devoted member of The Church of Jesus Christ of Latter-day Saints, Glen served faithfully in several capacities; as a bishop, high priest group leader, counselor in a stake presidency and as a dedicated home teacher. Glen exemplified the life of the Savior through his many acts of service, known and unknown. He continued that service in two additional missions with his wife Joanne, first at the Family History Mission in Salt Lake City from 1998-1999 and later serving for 10 years as Public Affairs missionaries at the Joseph Smith Memorial Building on Temple Square. Glen suffered unexpected heart problems as a young father and was blessed by the service and skills of many, including Dr. Russell M. Nelson who performed heart surgery on Glen, which extended his life of faith, service and family for decades. Glen enjoyed spending time with his family, especially his grandchildren, and could often be found on the golf course or riding mules and horses with his sons and grandkids. An avid BYU fan, Glen was a football and basketball season ticket holder for many years and was always willing to share his tickets with his friends and family. Glen is survived by his wife, Joanne; three sons: Greg (Lynnell), Kevin (Amy) and Scott (Nicole); sister, Aljoe King; grandchildren: Trevor (Kathryn), Casey (Bryan), McKenzie (Colby), Ryan, Courtney, Ashley, Abby, Brody, Bentley, and Holden as well as three great-grandchildren: Rae, Carson and Margaret. There were countless other relatives, friends and strangers who were blessed by Glen’s life of quiet service. Glen was preceded in death by his parents. Funeral services will be held on Friday, March 9, 2018 at 11:00 a.m. in the Edgemont 8th Ward Chapel, 3050 Mojave Lane, Provo, Utah. Family and friends may visit with the family at Berg Mortuary, 185 East Center Street, Provo on Thursday, from 6-8:00 p.m. and at the church Friday, from 9:30-10:45 a.m. prior to services. Interment will be in Eastlawn Memorial Hills, Provo, Utah. Condolences may be expressed to the family at www.bergmortuary.com.

The family of Glen Chester King created this Life Tributes page to make it easy to share your memories.

Send flowers to the King family.