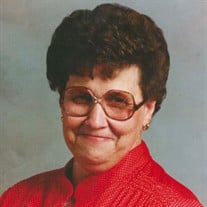 Our dear, sweet Glenda Renea Lee Ainge returned to her Heavenly Father on July 1, 2017. She was born August 16, 1936 to Glen W and Veoan Emily Draper Lee in Provo, UT. She was the oldest of five children. Glenda attended Timpanogos Elementary, Dixon Junior High, and graduated from Provo High School in 1954. She married her sweetheart Le Ray Arthur Ainge on August 22, 1953. They were blessed with two children RaeAnn, and Jeffrey. Their marriage was later solemnized in the Mount Timpanogos Temple on October 5, 2000. She was employed at CUCC for many years and later for KOA Campgrounds in Provo. Not only did she work as a caregiver but was a caregiver in her own home taking great care of Ray and Jeffer for many years. Her greatest joy was being a wife and mother. She was a member of the Provo ELKS Lodge for several years. She was an active member of The Church of Jesus Christ of Latter-day Saints, where she served in many callings; her favorite being in the Relief Society Presidency serving over the Care Center in their Stake. She got great joy teaching and visiting the sisters there. Glenda had a great love for crocheting and knitting. She spent countless hours making items for family, friends and humanitarian groups. She loved old black and white westerns, and cheered loudly for BYU. She loved visiting on her front porch and loved giving hugs and kisses. She resided in Provo for 80 years until life got hard. At that point she gave Dallas and Kristina Reid (Niece) a great blessing by letting them and their children Jourdyn, Jentrie, Dawson, Kennedie and Kutler care for her, enjoy her hugs, kisses, crazy stories, and love of the gospel for the past 6 months. They will be forever changed by her love. We love and will miss you Aunt Glenda. Dallas and Kristina express heartfelt gratitude to the Summit Home Health and Hospice (especially Leandra and Amy) who have affectionately cared for Glenda the last few months. Glenda is survived by 3 brothers and 1 sister: Larry (Kathy) Lee, Grantsville, UT; Carl (Dixie) Lee, Lyman, WY; Connie (Wendell) Bradshaw, Salem, UT; and Kevin Lee, Taylorsville, UT. She was preceded in death by her husband, Le Ray Arthur Ainge; son, Jeffrey Paul Ainge; parents, Glen and Veoan Lee; in-laws, William (Sadie) Ainge; and sister-in-law, Dian Lee. Funeral Services will be held at 11:00 a.m., Thursday, July 6, 2017 at the Berg Drawing Room Chapel, 185 East Center Street, Provo, Utah. Friends may call from 9:30-10:50 a.m. prior to services. Interment will be in the Provo City Cemetery. Condolences may be expressed at www.bergmortuary.com.

The family of Glenda Renea Lee Ainge created this Life Tributes page to make it easy to share your memories.

Send flowers to the Ainge family.