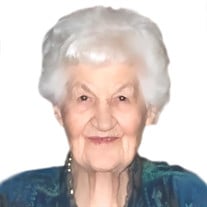 Our beloved mother, grandmother, great-grandmother, great-great-grandmother, aunt, and friend, Glenna Geneva Pickett Hill, passed away peacefully from natural causes on July 14, 2020 at the Courtyard at Jamestown Assisted Living Facility. Glenna was born on July 22, 1919 in Gunnison, Utah to Sarah Agnes Westover and LaBriel Pickett. Glenna was the oldest of four children and was named after two young aunts (Glenna and Geneva) who passed away in the 1918 flu pandemic. Glenna grew up on a farm with many responsibilities such as thinning, weeding, and topping beets, along with herding cows and turkeys. She loved being a member of the 4H club, hiking, and playing at the “big ditch”. One year, she admired a doll in a store window she passed on her way to school each day. What a disappointment when later the doll was no longer in the window. But then she was overjoyed to unwrap it as her Christmas gift that year. The Great Depression devastated her family when they lost all their money when the local bank closed. But they did have cows and chickens. Glenna lived on chicken and ice cream for an entire year. It was a long time before she ever wanted chicken or ice cream again. A lifelong resident of Utah, she eventually moved from Gunnison to Ephraim where she graduated from Snow College. Subsequently, she attended Brigham Young University, earning a degree in elementary education. At that time there were only nineteen hundred students at the university, mostly men. She attended most of her classes on the old lower campus. While attending BYU, she lived next door to an apartment of several Hill brothers. When she delivered a phone message there, she met Sherman, who immediately began courting her. On their first date, he took Glenna to her first and last wrestling match. Their second date at a matinee was an improvement. On that date, Sherman prophetically announced he would marry her on her next birthday. His prophecy came true, and they raised four children together in Provo: Carolyn, Sherry, ReNae, and Sherman (Botch). Glenna worked at a department store, Firmages, for a number of years before she got a job at the BY High bookstore and then the bookstore on BYU campus, where she enjoyed working for decades. She also served faithfully in The Church of Jesus Christ of Latter-day Saints—she was a Relief Society President with two small children in tow. And for many years she prepared all of the hams for her ward’s funeral luncheons and ironed altar cloths for the temple in addition to performing her visiting teaching and other church callings at the same time. Glenna also diligently supported her husband as he served as the Stake President for the East Provo Stake. She had numerous opportunities to entertain General Authorities in her home, all while raising young children. On one occasion when LeGrand Richards was staying with them, Glenna’s youngest daughter, ReNae, asked if his morning prescriptions were candy. His response led her to go ahead and try the bitter pill as he chuckled at her sour expression. Glenna was known as a meticulously clean and tidy housekeeper and an excellent cook and seamstress. She sewed clothes, knitted, quilted, and crocheted. Everyone marveled at her dry wit, her thrift (she really knew how to stretch a penny), her steadiness and emotional strength, and her continual thoughtfulness toward others. Glenna enjoyed spending the last seven years of her life at the Courtyard at Jamestown. She made many friends and served in a leadership position as a liaison to the residents there. Glenna is preceded in death by her parents, Sarah Agnes Westover and LaBriel Pickett; her husband, Sherman Taft Hill, Sr.; her brother, Bronzel LaBriel Pickett; her sisters, Mariam Phillips and Maxcine McPhee Weight, and her daughter, Carolyn Joy Carter (Steve). She is survived by her daughters, Sherry Lee McCollum (John) and ReNae Hill; her son, Sherman Taft Hill, Jr. (Fran); twelve grandchildren, twenty great-grandchildren, and two great-great-granddaughters. We all love and miss Glenna very much. Funeral services will be held at 11:00 a.m., Wednesday, July 22, 2020 at the Berg Drawing Room Chapel, 185 East Center Street, Provo, Utah. Friends may call from 10-10:50 a.m. prior to services. Interment, Eastlawn Memorial Hills. Condolences may be expressed at www.bergmortuary.com.

The family of Glenna Geneva Pickett Hill created this Life Tributes page to make it easy to share your memories.

Send flowers to the Hill family.