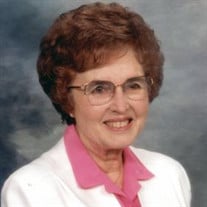 Gloria Singleton Anderson, beloved mother, grandmother, great-grandmother, aunt, and friend passed away peacefully on January 11, 2019 into the loving arms of her sweet husband, Harold. She was born in Provo, Utah on February 7, 1924 to Arthur Lenn Singleton and Louise McEwan Singleton. She had one sister, Donna Singleton Jensen. Gloria lived and raised her family in Orem and Provo. She met her husband, Harold, at Provo High School. After he returned from serving in WWII, they were married on June 11, 1947 in the Salt Lake Temple. They were blessed with 4 children, 20 grandchildren, and 39 great-grandchildren (#40 soon), who have brought her much joy and happiness. Gloria was a happy and delightful person with a loving spirit. She made everyone she met feel loved and appreciated. She was young at heart and willing to participate in all family activities and events. She was musically talented and loved the dramatic arts. As a child she would create plays and perform them in their garage. She would charge a few cents for the neighbors to come watch the plays. She loved to sing and dance and was in various school plays and productions. She sang with her sister and the two were in demand to sing at social functions and funerals. She sang in “My Fair Lady” and “Madame Butterfly” with the Utah Valley Opera Association, and was also a member of the Madsen Memorial Chorus. Gloria served in many callings in The Church of Jesus Christ of Latter-day Saints. She especially enjoyed working with Harold in the Provo Temple as an assistant matron and later as an ordinance worker. She also served with Harold at the Provo MTC. Gloria loved the association she had with BYU friends while Harold worked at the BYU Physical Plant. She especially enjoyed attending BYU football and basketball games. Gloria was preceded in death by her husband, Harold, after 67 years of marriage; her parents; sister, Donna; and her daughter, Karen Anderson Ekins. She is survived by her children, Patty (Ron) Ford, Sheri (Doug) Rees, and Paul (Tani) Anderson; and Brent Ekins, a son-in-law. Funeral Services will be held on Friday, January 18, 2019 at 11:00 a.m. at the Edgemont 8th Ward Chapel, 3050 Mojave Lane, Provo, Utah. Friends may visit with the family Thursday, January 17, at the Berg Mortuary of Provo, 185 East Center Street, from 6-8:00 p.m. and at the church Friday from 9:30-10:45 a.m. prior to services. Interment, Eastlawn Memorial Hills. Condolences may be expressed at www.bergmortuary.com.

Gloria Singleton Anderson, beloved mother, grandmother, great-grandmother, aunt, and friend passed away peacefully on January 11, 2019 into the loving arms of her sweet husband, Harold. She was born in Provo, Utah on February 7, 1924 to Arthur... View Obituary & Service Information

The family of Gloria Singleton Anderson created this Life Tributes page to make it easy to share your memories.