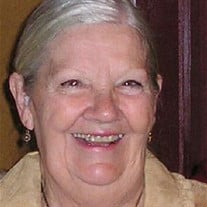 Gloria Jean Kimber, of Orem, Utah passed away on February 24, 2016 at the age of 84, after a long and courageous battle with Alzheimer’s disease. She passed from this life as she was surrounded by members of her family. She was born November 11, 1931 in Salt Lake City, Utah to George Henry and Beatrice (Dennis) Fillmore. She and her siblings George, Dorothy and Joyce grew up in Spanish Fork Canyon on a small farm. She married Ray Erickson who passed away some time after the birth of daughters Gloria and Judy. Gloria subsequently married Frank Jay Kimber Sr. on November 15, 1953 and enjoyed the additions of Frank J. and Suzette to their small family. They were sealed in the Manti Temple on May 12, 2004. Gloria and Frank had many adventures together including a cross country trip to Florida on a Suzuki GS 1000 motorcycle. Family fun and adventure was important to the Kimber family with regular camping trips to Cherry Creek and the sand dunes. Not many know that Gloria had her own dune buggy. Another adventure highlight was a trip to Hawaii with daughter Suzette and her husband. Later in life they continued the adventure trail with Mountain Man Rendezvous trips to locations like Ft. Bridger with family members. Retirement years with Frank Sr. were spent in their lovely home located in Overton, Nevada with time spent improving the landscape and maintaining the home. Frequent trips to the swap meet in Las Vegas created many memories together. Gloria returned to Orem after Frank Sr.’s health decline and subsequent passing away on September 2, 2002. Her greatest joy was her children and grandchildren. Gloria had the ability to enjoy the moment and appreciated the small things in life. Gloria was known for her cooking, with an uncanny specialty for German and Swedish pancakes. She is survived by her children: Gloria (Ron) Prestwich, Judy Huston, Frank J. Jr (Yvonne) Kimber and Suzette (Mike) Stone, 19 grandchildren, 42 great-grandchildren and one great-great-grandchild. The family would like to extend a special thanks to the Encompass Home Health and Hospice staff that, for the past three years, cared for Gloria while she lived at the “Our House” facility. Funeral Services will be held on Friday, March 4, 2016 at 11:00 a.m. at Berg Mortuary located at 500 North State Street, Orem. Family and friends may visit with the family prior to the funeral service from 10:00 -10:45 a.m. at the same location. Interment will be at the Timpanogos Memorial Gardens located at 1000 North 400 East, Orem, Utah. Condolences may be expressed to the family at www.bergmortuary.com.

Gloria Jean Kimber, of Orem, Utah passed away on February 24, 2016 at the age of 84, after a long and courageous battle with Alzheimer&#8217;s disease. She passed from this life as she was surrounded by members of her family. She was born November... View Obituary & Service Information

The family of Gloria Jean Kimber created this Life Tributes page to make it easy to share your memories.

Gloria Jean Kimber, of Orem, Utah passed away on February 24,...

Send flowers to the Kimber family.