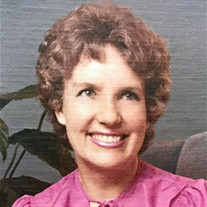 RaOla was born July 4, 1928 in Roosevelt, Utah to Chancy Eugene and Hermione Jackson Hill. She graduated from Lincoln High School in Provo, Utah, and later attended Brigham Young University where she met her sweetheart, Darrel Lee. RaOla graduated with a bachelor’s degree from BYU in 1952, and taught elementary school in both Hoytsville, Utah; and American Fork, Utah. RaOla and Darrel were married in the Salt Lake City Temple of The Church of Jesus Christ of Latter-day Saints on March 6, 1953. The couple moved to Seattle, where Darrel graduated from dental school, and then settled in Hemet, California. RaOla and Darrel were blessed with five children. RaOla’s great loves in life were God, her Family, and her Country. She selflessly gave of her life for all of these, always putting the needs of her family and people around her before her own. RaOla also gave public service in the church, PTA, Daughters of Utah Pioneers, and other organizations. Throughout her entire life, RaOla lived faithfully and served faithfully in various callings around the world. She served as a temple worker in five temples, and completed three missions (Zimbabwe, Preston England Temple, Nauvoo Temple) with her favorite mission companion and husband, Darrel. RaOla was multi-talented, an extremely hard worker, and the best mom her children could have had. She and her husband also opened their home and hearts to eight Native American children over the years. Most of all, she had a long and loving marriage of 58 years. Ever joyful, RaOla will be missed for her wonderful smile, and never-failing sense of humor. She is survived by her sister, Joy Wendolyn Hill Adams; and four of her five children; Dale E. (Deborah A.) Lee, Susan L. (Hal) Gregersen, Shaunna L. Lee, David H. (Annelisa) Lee; 20 grandchildren, and 25 1/2 great-grandchildren. She was preceded in death by her husband, Darrel Dean Lee (1930-2011), and her son, Vern G. Lee (1958-1986). Funeral services will be held at 12:00 p.m., Saturday, September 8, 2018 at the Pleasant View 7th Ward Chapel, 2445 North 650 East, Provo, Utah. Friends may call at the Pleasant View Chapel from 9:30-11:30 a.m. prior to services. Interment will be at Provo City Cemetery. Condolences may be sent to the family at www.bergmortuary.com.

The family of Gloria RaOla Hill Lee created this Life Tributes page to make it easy to share your memories.

Send flowers to the Lee family.