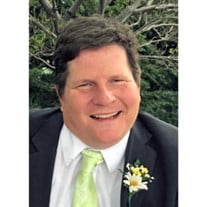 Gordon Mark Romney, husband, father, grandfather, brother, and son, passed away on June 4, 2022. Gordon was born to Victoria Lurene Wilkinson Romney and Gordon Wilson Romney on August 16, 1966 in Bountiful, Utah. He was the eldest of eight... View Obituary & Service Information

The family of Gordon Mark Romney created this Life Tributes page to make it easy to share your memories.

Send flowers to the Romney family.