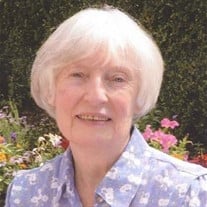 This morning at 05:30 hrs 5 January 2015 Gwendolyn Ence Frederick wife, best friend and companion of 64 years to Nolan Frederick succumbed to a fierce cold. Neither of them expected this cold to kill her. It wasn't supposed to. It was just a bad cold. Gwen was born in Price, Utah on the 20th of June 1930. Not long thereafter, her parents relocated to Provo, Utah, where she spent her childhood and adolescent years. She attended and graduated from Provo High School where she met her husband to-be in the high school orchestra where she held the Principle Chair in the clarinet section. After graduating from Provo High School she attended Brigham Young University until she married her High School Sweetheart. Their marriage brought them one very special daughter who in-turn brought them 6 grandchildren and 12 great-grandchildren. While her husband attended CU-Boulder, Gwen drove for Meals on Wheels. She thoroughly enjoyed meeting the people she served. Gwen and Nolan loved the Continental Divide and hiked to and fished most all the escarpment lakes. After learning how to ski skinny skis she became an avid cross-country skier. She and her husband also became very competent white-water rafters. They were the first to begin rafting the Arkansas River east of Salida. Gwen also rafted the San Juan River and hiked the full length of The Grand Gulch Gorge two times. She loved the South-eastern Utah canyon country. Gwen was an active and faithful member of the Boulder Ward of the LDS church. She served two years as a local missionary bringing the LDS message to whomever would give her audience. She served for seven years as a technical name translator and recorder for Spanish American birth and death records. Gwen was deeply loved and admired by all who knew her. Gwen is survived by her dedicated husband, Nolan Frederick, her brother Larry Ence of Bountiful, UT. His children: Daniel, Matthew, Jonathan, Thomas and Amelia. Her daughter Roberta Lyn Frederick Ericksen of Afton, WY, granddaughters Larisa Christine Howard of Warrenton, VA, Tamara Nicole Ericksen of Lehi, UT, Tanaia Dawn Vogler of San Antonio, TX, Tayana Kamber Ericksen of Salt Lake City, UT, Shanna Leta Gain of Lehi, UT, Lorin Frederick Ericksen of Toquerville, UT, Great-grand-children: Alden, Sterling and Aiyanna Howard, Bryan, Patrick and David Vogeler, Afton and Caleb Gain, Cadence Ericksen. and Brianna and Adrian Alva-Ericksen. Funeral services will be held on Tuesday, January 13, 2015 at 11:00 a.m. in the Berg Mortuary Drawing Room Chapel, 185 East Center Street, Provo. Friends may call on Tuesday morning from 10 until 10:45. Interment Provo City Cemetery.

This morning at 05:30 hrs 5 January 2015 Gwendolyn Ence Frederick wife, best friend and companion of 64 years to Nolan Frederick succumbed to a fierce cold. Neither of them expected this cold to kill her. It wasn't supposed to. It was just a... View Obituary & Service Information

The family of Gwendolyn Ence Frederick created this Life Tributes page to make it easy to share your memories.

Send flowers to the Frederick family.