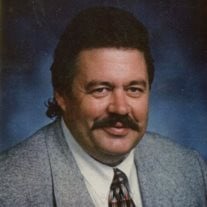 Hal Wyatt Pectol Jr., our beloved son, father, grandfather and friend, returned to our Heavenly Father and was reunited with his dad and son on Wednesday, February 19, 2014 in Provo, Utah. Wyatt passed away peacefully at his home of natural causes. He was born on February 9, 1950 in Palo Alto, California to Hal Wyatt Pectol Sr. and Karma Hatch Pectol. Wyatt graduated from San Carlos High School in San Carlos, California and went on to attend Brigham Young University in Provo, Utah. Wyatt married Karen Robinson on May 9, 1969 in Spanish Fork, Utah. Their marriage was sealed in the Salt Lake Temple. They later divorced, but remained friends caring for their children and many grandchildren. Wyatt was a devoted member of The Church of Jesus Christ of Latter-day Saints. He served in many callings and particularly enjoyed his work with the primary, scouting and home teaching. A natural born salesman, Wyatt earned many awards throughout his career at Salmons in Orem, Utah, Real Estate Exchange in Ogden, Utah, Bradshaw Motors in St. George, Utah and Naylor Dodge and Orvins Auto in Provo, Utah. Wyatt was an active supporter of NA and AA where he made many close friends. He was proud to have recently received his coin for his 27th birthday. Wyatt had many passions including sports - especially BYU basketball and football and the San Francisco 49ers – all kinds of music, old cars, Harley Davidson motorcycles, camping and hunting. But nothing gave him more pleasure than spending quality time with his kids and grandkids. “Dad called us often and would always leave a message if he got our voicemail.” He never missed a birthday and made sure we always got a card with his sweet words letting us know that we were “the best” and “so cool" and let us know he thought we were all "perfect." Wyatt is survived by his mother, Karma Pectol, his daughter-in-law, Shanea Pectol, children, Eric Pectol, Jana Glasmann, Ryan (Angie) Pectol, Sheila (Damon) Kessler, Benjamin Pectol, Brent (Chantelle) Pectol, and Karma Leia (Rudolph) DeAnda, 19 Grandchildren, 1 Great-grandson and many uncles, aunts and cousins. He was preceded in death by his father, Hal Wyatt Pectol Sr., his son, Jeromy Talcott Pectol and daughter-in-law, Cami Steel Pectol. Funeral services will be held at 11:00 a.m., Monday, February 24, 2014 at the Slate Canyon 4th Ward Chapel, 715 S. Utah Avenue, Provo, Utah. Friends and family may call at the Berg Mortuary of Provo, 185 East Center Street, Sunday from 6:00-8:00 p.m. and at the church Monday from 9:30-10:30 a.m. prior to services. Interment will be in the Provo City Cemetery. Condolences may be sent through his obituary at www.bergmortuary.com.

Hal Wyatt Pectol Jr., our beloved son, father, grandfather and friend, returned to our Heavenly Father and was reunited with his dad and son on Wednesday, February 19, 2014 in Provo, Utah. Wyatt passed away peacefully at his home of natural... View Obituary & Service Information

The family of Hal Wyatt Pectol Jr. created this Life Tributes page to make it easy to share your memories.

Send flowers to the Pectol family.