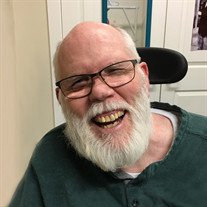 Harold Gregory Johnson; beloved son, brother, father, and grandfather; returned home Wednesday, February 5, 2020, after a lifelong illness. Greg was born in Provo, Utah, on February 26, 1960, to Harold and Joanne Johnson. He was the fourth child and only boy. He had three older sisters: Nancy, Sally, and Carol. The family moved to Cheyenne, Wyoming; San Diego, California; and finally Escondido, California. Greg loved hiking around Escondido. Greg’s favorite tradition while the family lived in California was their annual trip to Disneyland. He graduated from San Pasqual High School in 1978. Greg was an active member of The Church of Jesus Christ of Latter-day Saints and served a full-time mission in the Leeds, England Mission. He attended Ricks College in Rexburg, Idaho, and then moved to Provo, Utah. He earned his degree in Graphic Art. Greg has been an artist all his life and always found it to be his strongest way of self-expression. He was a comic artist for the Rick’s College Apartment Paper, a mural painter, and painted for various companies throughout his career. Art helped Greg cope with his illness and brought him joy and comfort. While in Provo, Greg met and married Jill Chandler. They were later divorced, but had three children together. Greg’s children meant the world to him. He worked various jobs in order to support his young family. He always looked forward to speaking with his children each Sunday night. One of Greg’s most treasured moments was his opportunity to attend his daughter’s sealing in the Salt Lake Temple. Greg was so grateful to have been a father. Greg’s greatest love in life was making people happy. He loved his craft and continued to make art even after he began to lose his sight and his hands shook. He shifted his art from paintings and murals to “blind contour art”. Although he was not able to see his final product, he loved the joy it brought others. Greg had a wonderful sense of humor and always had a joke prepared whenever someone came to visit. He was very social and loved attending activities in his assisted living facility. Greg enjoyed making faces at everyone in order to get a laugh. The family would like to express their heartfelt gratitude to the staff at Provo Assisted Living and OneCare Home Health & Hospice. Their loving care for Greg changed his life. Greg is survived by his father, Harold G. Johnson; two sisters, Sally (Gene) Stosich and Carol (Lou) Schneider; three children, Daniel (Kelly) Johnson, Tawnya (Jake) Prince, and Zoey (Noah) Milton; grandchildren, Cleo Rosalie Prince and Diana Justice Johnson; and many nieces and nephews. Greg was preceded in death by his mother, Joanne Creer Johnson and his older sister, Nancy Tracy. Funeral services will be held at 11:00 a.m., Saturday, February 15, 2020 at the Berg Drawing Room Chapel, 185 East Center Street, Provo, Utah. Friends may visit with the family from 9:30-10:50 a.m. prior to services. Interment will be at the Provo City Cemetery following the services. Condolences may be expressed at www.bergmortuary.com.

The family of Harold Gregory Johnson created this Life Tributes page to make it easy to share your memories.