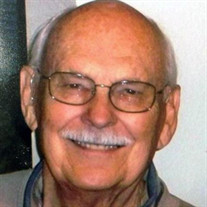 Harold Glenn Johnson, beloved father, grandfather, great grandfather, and great great grandfather returned home Friday, February 19, 2021 due to pneumonia. He was 90 years old. Harold was born November 21, 1930 to Charles Fillmore and Josepha Dunn Johnson in Martin, Carbon County, Utah. Harold had one older sister, Frances Maud Johnson Beard (Harry), and two older brothers, Ralph Doran Johnson (Millie) and Charles Franklin Johnson (Theo). His cousin, Rayma, was raised as Harold’s sibling after Frances passed away in 1932. Harold and his family moved to Provo, UT in 1934. While in Provo, Harold met his sweetheart Joanne Creer. They became high school sweethearts while attending Provo High School. They were married and sealed in the Salt Lake Temple May 8, 1950. In 1951, Harold joined the United States Air Force and served until 1955. During that time, Harold and Joanne moved to Cheyenne, Wyoming, where their daughter, Nancy, was born. The family moved back to Provo, then Orem, UT and had three more children, Sally, Carol, and Greg. Harold attended Brigham Young University and worked for the Denver and Rio Grande Western Railroad Co. In 1960, the family moved back to Cheyenne, WY and Harold began working for General Dynamics Astronautics. In 1962, the family relocated to San Diego, California. The family later moved to Escondido, CA. Harold and Joanne (HalnJo) lived in Escondido for 32 years and had lots of wonderful friends there. Harold and Joanne loved to travel; they went on trips all over the western United States. They traveled to Mexico and went on an Alaskan cruise. They loved going on long adventures together and visited family in California, Utah, Arizona, and Colorado. In 1998, Joanne decided they should move closer to family, so they sold their home in Escondido and moved to Mapleton, UT. They loved being back in Utah, experiencing the seasons and having time to spend with family. Harold loved fishing on the Provo River. Provo Canyon was one of his favorite places. Joanne passed away unexpectedly June 6, 2002. Harold loved genealogy and indexing. He had a deep love for the gospel of The Church of Jesus Christ of Latter-day Saints. He had many callings over the years in The Church, including serving as a service missionary for the Bishop’s Storehouse. He loved spending times with his children, grandchildren, and great grandchildren. Harold or Hal as he introduced himself in later years, was always kind and helpful to others. He leaves behind a deep and long legacy of love. Harold was preceded in death by his parents; brothers and sister; his wife, Joanne; daughter, Nancy Johnson Tracy; son, Harold Gregory Johnson; and his niece, Rayma Beard Allred. He is survived by his two daughters, Sally Stosich (Eugene) and Carol Schneider (Lou), as well as 15 grandchildren, 19 great grandchildren, and 1 great great grandchild. Harold lived a very full life and will be greatly missed. The family wishes to extend deep gratitude to the staff of the Courtyard at Jamestown for all their service for Hal over the last few years. Thank you to all of the wonderful medical professionals at Utah Valley Hospital who cared for him so tenderly. Funeral Services will be held at 11:00 a.m., Wednesday, February 24, 2021 at the Berg Drawing Room Chapel, 185 East Center Street, Provo, Utah. Friends may call from 9:30-10:45 a.m. prior to services. Interment, Provo City Cemetery. Condolences may be expressed to the family at www.bergmortuary.com.

The family of Harold Glenn Johnson created this Life Tributes page to make it easy to share your memories.