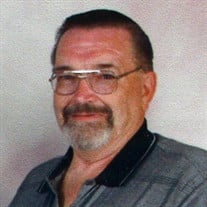 On Thursday, April 1, 2021 Harold Eugene Throckmorton Sr. passed away quietly surrounded by his wife and children at the age of 77. He was born on March 22, 1944 in Payson, Utah to Sarah Emma Branin and Lewis Orlando Throckmorton. He was raised by a single mother after his father was killed while serving in WWII. After serving many honorable years in the United States Army, Hal was honorably discharged when his brother was tragically killed from a car accident while on leave from the Navy. After his discharge from the Army, he worked for the United States Postal Service for 32 years until his retirement. In 1966, he married Helen Jeanette Clark and they had 6 children together. They later divorced. He married JoEllen Holdaway in 2003 where he gained 6 stepchildren. Hal was an avid bowler and made lifelong friends wherever he went. He enjoyed his time with friends at The Elks Lodge and The Hitching Post. He loved watching T.V. with his two dogs and loved reading, especially Louis L’Amour or anything that had to do with WWII. He loved his wife, kids, grandkids, and great grandkids with all his heart. He will be truly missed by all who knew him. We would like to thank all the doctors and nurses in the ICU at Timpanogos Regional Hospital for all the tender loving care that they gave our Husband, Father and Grandfather. Harold is survived by his wife JoEllen Throckmorton, his children Michelle (Robert) Schafer, Janelle (Jeff) Smith, Hal (Suzie) Throckmorton Jr., Paul (Tish) Throckmorton, Charlynn Begay, Cheri (Jon) Brewer, stepchildren Jason (Natalia) Holdaway, Curt Holdaway, Doug (Carrie) Holdaway, J.R. Holdaway, Michelle (John) Ellis, and Danielle (Dustin) Holdaway, 38 grandchildren, 3 great grandchildren his sisters Patsy Clements, and Karen Hansen. He is preceded in death by his father Lewis, mother Sarah, and brother Calvin. Graveside services will be held at 11:00 a.m., Monday, April 12, 2021 at Eastlawn Memorial Hills, 4800 North 650 East, Provo, Utah. Friends and family may call at the Berg Mortuary of Provo, 185 East Center Street, Sunday, April 11, from 6-8:00 p.m. Condolences may be expressed to the family at www.bergmortuary.com.

On Thursday, April 1, 2021 Harold Eugene Throckmorton Sr. passed away quietly surrounded by his wife and children at the age of 77. He was born on March 22, 1944 in Payson, Utah to Sarah Emma Branin and Lewis Orlando Throckmorton. He was raised... View Obituary & Service Information

The family of Harold Eugene Throckmorton created this Life Tributes page to make it easy to share your memories.

Send flowers to the Throckmorton family.