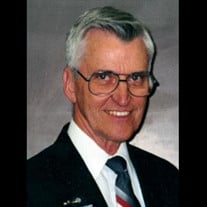 Harvey Junior Fletcher, beloved father, husband, grandfather, great grandfather, brother, uncle, and friend passed away on November 17, 2019 in Provo, UT at the age of 96. He was born on April 9, 1923 in NY, NY to Lorena Chipman and Harvey Fletcher. The family was raised in Flushing Meadows, NY. He learned to love science during family discussions around the dinner table, and he grew to love The Church of Jesus Christ of Latter-day Saints from the teachings and service of his parents. In 1940 Harvey attended BYU for one year, but then transferred to MIT to obtain a BS degree in physics. In 1944 he enlisted in the U.S. Navy and went through officer training to become a radar officer. He was in San Diego ready to be shipped to Okinawa when the war with Japan ended. He spent time as an officer in Okinawa. He obtained an MS degree from Cal Tech and then was the first person to earn a PhD in mathematics at the U of Utah. For most of his career he taught in the Math Department at BYU, but took leaves to work at the China Lake Naval Research Facility in California, Bell Labs in New Jersey, and for the Apollo moon program in Washington, DC. Harvey met his wife Deah Tonks while studying for his PhD at the U of Utah, and they were married in the Idaho Falls Temple on March 20, 1953. Together they raised six children: Mary Lyn (Dennis), Tom (Beth), John (Terri), Deanna (Peter), Amy (Doug) and Judy (Preston). Deah and Harvey created a loving, secure home for their children, 28 grandchildren, and 34 great grandchildren. Harvey loved Deah with all his heart, and he cared for her through a long illness before her death in 2014. Harvey loved to serve people and make them happy. He served in the Provo community as a member of the Kiwanis Club and President of the Provo Freedom Festival. He had many callings in The Church of Jesus Christ of Latter-day Saints including a counselor in several bishoprics, later as bishop and counselor in a stake presidency. He served as a ward missionary in Maryland and later three full-time missions with his wife: at the Ancestral and Medieval File Center in Provo, in the Geneva-Switzerland Mission (French-speaking), and to the Family History Center Mission in SLC. They also served many years together as ordinance workers in the Provo Temple. After his wife passed away, Harvey tried to spend as much time as he could performing ordinances in the Provo Temple until his health declined. He often said that service in the temple lasts for the eternities. Harvey is preceded in death by his parents, his sister Phyllis Firmage and brothers Stephen, Charles and James Fletcher. Funeral services to honor Harvey will be held at 11:00 am, Saturday, November 23, 2019 at the Edgewood Ward, 3511 North 180 East, Provo, UT. Friends and family may visit at the Berg Mortuary in Provo, 185 East Center Street, Friday from 6:30-8:00 pm and again at the Edgewood Ward from 9:30-10:45 am on Saturday. Interment will be at the American Fork City Cemetery. Condolences may also be sent online at www.bergmortuary.com.

Harvey Junior Fletcher, beloved father, husband, grandfather, great grandfather, brother, uncle, and friend passed away on November 17, 2019 in Provo, UT at the age of 96. He was born on April 9, 1923 in NY, NY to Lorena Chipman and Harvey Fletcher.... View Obituary & Service Information

The family of Harvey Junior Fletcher created this Life Tributes page to make it easy to share your memories.

Send flowers to the Fletcher family.