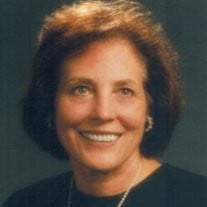 Hazel Dawn Biggs Meldrum passed away after a brave and difficult battle with brain cancer on December 19, 2013 in her home, surrounded by her children. Dawn was born January 20, 1934 and spent the first 18 years of her life in the Blanding “Castle House” her grandfather built. Dawn always felt blessed to be raised in the family she had, and loved growing up in a small town that had “a good feeling” about it. In Blanding she had fond memories of a childhood where she had opportunities to “make their own fun” including making perfume out of rose petals, inventing sugar treats during rations and most of all, forming the “S.L.O.B.” club (which she successfully kept the meaning secret until shortly before her passing.) The deep friendships that Dawn developed from her childhood and youth were important to her and she maintained them until her death. Dawn graduated from both Tooele High and San Jan High Schools, and went on to graduate from BYU with a degree in Secondary Education. After graduation from BYU, she taught Physical Education at both Grantsville High School and Provo High. After teaching and raising a family, she entered the work force as a librarian for Provo City. During the years that Dawn wasn’t employed as a teacher, she still taught those around her to give of yourself with service and kindness which was evident when life’s circumstances called for her to care for her ailing parents and husband, children, friends, family and ward members which she did quietly and without attention. Dawn felt that those with advantages had a duty to help those that were less fortunate, and that “kindness begins with me”. Dawn was an active member of The Church of Jesus Christ of Latter-day Saints and held many positions, but the one she felt she cherished the most was that of Primary Teacher. She also enjoyed her years of service at the Provo Temple and Missionary Training Center. Dawn was extremely proud of her Mormon Pioneer heritage and drew strength from her many ancestor’s trials and tribulations on a daily basis. While studying at BYU, she met her college sweetheart and the person who she would go on to marry, Leon H. Meldrum. Leon and Dawn were married June 7, 1957 in the Salt lake Temple and loved each other deeply throughout life’s good and bad times. They lived in Provo for over forty years and held many church and community callings. Dawn is survived by her six children their spouses; Richard Meldrum (Sherilyn), of Kaysville, Russell Meldrum (Kim), of Zionsville, Indiana; Raymond Meldrum of West Jordan, Utah; Barbara Meldrum Green of South Jordan, Utah; Lynda Meldrum Blades of Woods Cross, Utah; and Carol Meldrum Embry (Mike), of Woods Cross, Utah. She is also survived by thirteen adoring grandchildren (whom she called treasures) who were her reason to fight and conquer cancer. Dawn was preceded in death by her husband Leon H. Meldrum, a sister Karen Sedar and a brother Niel Biggs. As her children, we have been extremely humbled by the outpouring of love and service from her friends, neighbors and care-givers during the course of caring for our mother. Your support has been invaluable and another testament to the legacy of kindness that our mother has left with her passing. We will forever be grateful for your love and loyalty during this difficult time. Funeral services will be held at 11:00 a.m., Saturday, December 28, 2013 at the Pleasantview 4th Ward Chapel, 2900 North 650 East, Provo, Utah. Friends may call at Berg Mortuary of Provo, 185 East Center Street, Friday, December 27, from 6-8:00 p.m. and at the church Saturday from 9:30-10:30 a.m. prior to services. Interment will be at the Provo Cemetery. Condolences may be sent online at www.bergmortuary.com.

Hazel Dawn Biggs Meldrum passed away after a brave and difficult battle with brain cancer on December 19, 2013 in her home, surrounded by her children. Dawn was born January 20, 1934 and spent the first 18 years of her life in the Blanding... View Obituary & Service Information

The family of Hazel Dawn Biggs Meldrum created this Life Tributes page to make it easy to share your memories.

Hazel Dawn Biggs Meldrum passed away after a brave and difficult...

Send flowers to the Meldrum family.