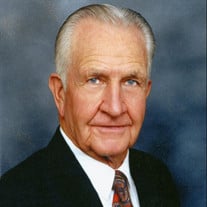 Heber Lee Davis peacefully completed his labors in this life July 9, 2019, at the age of 88. He was born December 1, 1930 in Provo Utah, to Ara and Hazel Dell Davis. He was the youngest of five children. His family moved to the Lakeview neighborhood shortly after he was born. His childhood was spent growing up on the farm his father bought from U and I Sugar. He learned how to work at a very young age, hauling hay, milking cows, and enjoying all the things that come with living on a farm. He married JoAnn Whitney in 1952. After they married, they both continued their education at Brigham Young University. Lee graduated from BYU and went on to earn his Master’s degree from Oregon State University. School over, he became active as a lieutenant in the US Airforce during the Korean War. He and JoAnn were stationed in Altus, Oklahoma, where their first baby, Steven, was born. In 1956, Lee and his small family returned to Provo where his three daughters, Cynthia, Patricia, and Julie were later born. He worked for several years at Geneva Steel, and then as a Provo City Fireman. In 1961, he bought land from his parents in Lakeview, built a home for his family, and then went into the farming business. Farming had its ups and downs, but not only did it help Lee, JoAnn and the kids learn the value of hard work, but also the benefits of working together as a family. Being the entrepreneur that he was, Lee decided that moving houses out of the way of the original I-15 freeway construction would be a good business venture. He successfully moved, remodeled and then sold or rented multiple houses that he had moved from Salt Lake to Provo. After selling their dairy, Lee and JoAnn decided that traveling the world would be their next great adventure. They journeyed all over the United States and to 52 other countries. For their next exciting trip, they had decided to travel to the tip of South America. Unfortunately, this did not happen because of a tragic accident that occurred while Lee while doing what he loved, working on the farm with his cows. Lee was a faithful member of The Church of Jesus Christ of Latter-day Saints and had incredible faith in his Heavenly Father and Jesus Christ. Not only did he have an unwavering testimony, but he the lived the gospel each day. He loved all the positions he held, but scouting was his favorite calling. He spent a lot of time with the young boys, camping, boating, swimming, hiking, horseback riding, and encouraging the boys work on merit badges. He was willing to let the boys or his church community use anything they might need from the farm. Lee was loved and admired as a friend to all and was never judgmental. Everyone knew him as a kind, caring and gentle man. His legacy of faith, service, and love is reflected in his posterity. His posterity includes four children, eighteen grandchildren, and thirty-five great-grandchildren. He was preceded in death by his parents, three sisters, and one brother. His life can be characterized by four words: faith, family, fun, and fortitude! “DO NOT MOURN BECAUSE HE IS GONE, BUT REJOICE THAT HE WAS.” The family would like to thank all the friends and neighbors who were so very helpful during his long stay at and under the care of the staff of Provo Rehab and Nursing. Special thanks also to the caring staff of Symbii Hospice. Funeral services will be held at 11:00 a.m., Tuesday, July 16, 2019 at the Parkway 2nd Ward Chapel, 2801 West 620 North, Provo, Utah. Friends may visit with the family from 9:30-10:45 a.m. prior to services. Interment, Provo City Cemetery. Condolences may be expressed at www.bergmortuary.com.

Heber Lee Davis peacefully completed his labors in this life July 9, 2019, at the age of 88. He was born December 1, 1930 in Provo Utah, to Ara and Hazel Dell Davis. He was the youngest of five children. His family moved to the Lakeview neighborhood... View Obituary & Service Information

The family of Heber Lee Davis created this Life Tributes page to make it easy to share your memories.

Heber Lee Davis peacefully completed his labors in this life...