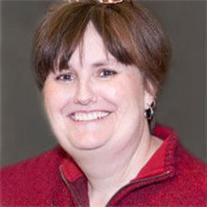 Heidi Bee Fawson Johansen, age 39, of Mapleton, took hold of her Heavenly Father's hands and rejoined Him on Thursday, March 7, 2013. She was married to Jeremy Johansen in the Salt Lake LDS Temple on March 10, 1994 and she leaves behind her husband, Jeremy, and two sons, Wade, 15, and Kizer, 13; her loving parents, Bill and Kris; and her beloved brother, Shane. Additional surviving close relatives include her aunt LuAnn; cousin Colby and family Amber, Kendall and Maci; cousin Mary Jane; in-laws John and Tonya; brothers and sisters-in-law Burke & Michelle, Darren & Heather, Branden & Monica, Lloydel & Kammi, Ryan & Kathleen; and a myriad of nieces, nephews and cousins. She also left numerous cherished friends. Heidi was preceded in death by her maternal grandparents, Leslie & Marjorie Kizer of Tooele, and her paternal grandparents, Ray & Beth Fawson of Grantsville. Born on August 21, 1973, Heidi graduated with honors from Springville High School, received an Associate of Science degree from Utah Valley State College and studied forensic science at the University of Utah, completing an internship at the Utah State Crime Lab. She joined the Utah County Sheriff's Office in 1999 and during her 12 years there excelled at her job as a 9-1-1 dispatcher and then later as the dispatch training supervisor. All who would like to celebrate Heidi's life are invited to visit with her family and friends at the church Sunday, the 10th of March from 6:00-8:00 p.m. and on Monday the 11th of March from 11:00-11:45 a.m. prior to funeral services at 12:00. Funeral services will be held at the Heritage LDS Chapel, 1580 North Main Street, Mapleton, Utah. Interment, Springville Evergreen Cemetery, 1997 South 400 East, Springville, Utah. Condolences may be sent through her obituary at www.bergmortuary.com. A memorial fund has been opened in her name at Zion's Bank. Donations in her memory may be made beginning Tuesday, March 12th.

Heidi Bee Fawson Johansen, age 39, of Mapleton, took hold of her Heavenly Father's hands and rejoined Him on Thursday, March 7, 2013. She was married to Jeremy Johansen in the Salt Lake LDS Temple on March 10, 1994 and she leaves behind her... View Obituary & Service Information

The family of Heidi Fawson Johansen created this Life Tributes page to make it easy to share your memories.