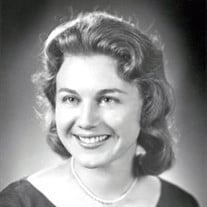 Helen Alice Ivanson Campbell passed away peacefully in her home of 54 years in Provo, Utah, on Monday, December 2, 2019. Helen was born to John (Ivan Dziomenko) and Alice (Alexandra Alekseevna) Ivanson in New York on September 1, 1933. From her childhood on a farm in Millington, New Jersey, Helen loved nature. She also had a great love for learning, especially of languages and literature. She earned a B.A. from Drew University and earned her Master’s from Brigham Young University. She taught 2nd grade in California. A pivotal point in her life was her conversion to The Church of Jesus Christ of Latter-day Saints. From that point on her life was centered on her faith. She married Leland Howard Campbell in the Salt Lake Temple on June 18, 1963. Howard and Helen had eight children, and Helen often said that her life’s calling was to be a mother. Helen was a cancer survivor. She was optimistic. She loved people. Helen served with her husband in the New York Rochester Mission in 2006-2007. She and Howard also served a mission in the Addiction Recovery Program, and they were temple workers in the Provo Temple for 17 years. Helen is preceded in death by her son, Leland John Campbell. She is survived by her husband, Leland Howard Campbell; children, Lavonallis Campbell, Anne Jellinich (Paul), Elisabeth Campbell (fiancé, Duff Coleman), Cathleen Ashton (Rendell), Joseph Campbell (Julie), David Campbell (Kelene), and Benjamin Campbell (Ara); also by 26 grandchildren and 6 great-grandchildren. Funeral services will be held at 1:00 p.m., Saturday, December 7, 2019 at the Edgemont 11th Ward Chapel, 3050 Mojave Lane, Provo, Utah. Friends may visit with the family from 12-12:45 p.m. prior to services. Interment, Provo City Cemetery. Condolences may be expressed at www.bergmortuary.com.

Helen Alice Ivanson Campbell passed away peacefully in her home of 54 years in Provo, Utah, on Monday, December 2, 2019. Helen was born to John (Ivan Dziomenko) and Alice (Alexandra Alekseevna) Ivanson in New York on September 1, 1933. From... View Obituary & Service Information

The family of Helen Alice Ivanson Campbell created this Life Tributes page to make it easy to share your memories.

Helen Alice Ivanson Campbell passed away peacefully in her home...

Send flowers to the Campbell family.