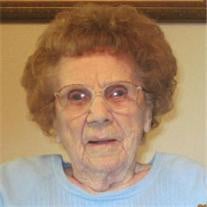 Helen Jones Hull, age 94, passed away November 19, 2010. She was born August 29, 1916 in Provo, UT to David Henry and Anna LaVern Duncan Jones. She married William LeRoy Hull February 28, 1935. They were sealed in the Salt Lake Temple in 1945. Together they owned a fruit farm in Edgemont for many years. Helen also worked at BYU Food Services for 30 years, managed the cafeteria for the first Language Training Mission, and was director of food services at the Mission Training Center when it opened until her retirement in 1979. Helen was an active member of the LDS church, having served many years in MIA, Primary, as Sunday School secretary and as a visiting teacher. Her hobbies were her grandchildren and great-grandchildren, fishing, hunting and quilting. She is survived by her children: Carol (Don) Adams, Norma (Dick) Nuttall, Bill (Helen) Hull, David (Betty) Hull; brother, Jack Jones; sister, Beth Orvin; 18 grandchildren, 57 great-grandchildren and 58 great-great-grandchildren. She was preceded in death by her husband; 2 sisters, Elva and Olive; son-in-law, Alan Mangum; and daughter-in-law, Hedy Hull. Funeral services will be held at 11:00 a.m., Tuesday, November 23, 2010 at the Vermont LDS Chapel, 400 North 400 East, Orem, UT. Friends may call at the Berg Mortuary of Provo, 185 East Center, Monday evening from 6 until 7:30 and at the church Tuesday from 9:30-10:45 a.m. Interment will be in East Lawn Memorial Hills, 4800 North 650 East, Provo, UT. Condolences may be sent to the family from www.bergmortuary.com.

The family of Helen Hull created this Life Tributes page to make it easy to share your memories.

Send flowers to the Hull family.