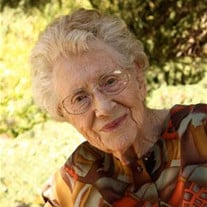 Helen Durfee Jones returned to the loving arms of her Heavenly Father and loving family on November 11, 2014. She was born July 6, 1917 to Jabez and Effie Adelia Walser Durfee in Bicknell, Utah. She was the second of six children. She spent 12 years of her youth in Colonia Juarez and Dublan Mexico. She moved to Ouray, Utah where she attended and later graduated high school. Helen moved to Provo and attended BYU Academy. She then met her soul mate, Clyde Jones. They were married December 24, 1941 in Ephraim, Utah and later sealed in the Manti Temple. Together they raised three children; Rodney Clyde, Glen Abraham and Kathlyn (Kandee). They shared 61 years of marriage until Clyde’s passing in 2002. She was a faithful member of the LDS church and served in numerous capacities. She served a mission with Clyde as a temple worker for 7 years in the Provo Temple. Helen was an active member of the Daughters of the Utah Pioneers where she served as a teacher. She was an excellent homemaker and cook and no one ever left her home hungry. She had several hobbies including crochet, knitting, traveling and she loved to read. Helen enjoyed a full house and being surrounded by her family for many occasions. Because she shared her anniversary with Christmas Eve, it was especially important to her and large family gatherings were the result. Her greatest attributes were unconditional love and service. Each and every grandchild thought they were the favorite and she made them feel as such. She was preceded in death by her sweet husband, Clyde; daughter, Kathlyn; parents and each of her siblings: Effie Franks, Wally Durfee, Louie Snyder, Fred Johnson and Anna Liddiard; and granddaughters, Teresa Lynn Jones and Chaylena Ann Jones. She is survived by sons, Rodney Clyde (Janeen) Provo, Utah and Glen Abraham (Jalynn) Palmer, Alaska; 15 grandchildren; 42 great-grandchildren and 5 great-great-grandchildren. Funeral services will be held at 2:00 p.m., Friday, November 14, 2014 at the Rivergrove 2nd Ward Chapel, 450 North 1220 West, Provo, Utah. Friends may call at the Berg Mortuary of Provo, 185 East Center Street, Thursday, November 13 from 6-8:00 p.m. and at the church Friday one hour prior to services at the chapel. Interment will be at East Lawn Memorial Hills, 4800 North 650 East, Provo following the funeral services. Condolences may be sent online at www.bergmortuary.com. The family would like to thank the nursing staff of the 7th floor at Utah Valley Regional Medical Center for their kind and compassionate care.

Helen Durfee Jones returned to the loving arms of her Heavenly Father and loving family on November 11, 2014. She was born July 6, 1917 to Jabez and Effie Adelia Walser Durfee in Bicknell, Utah. She was the second of six children. She spent... View Obituary & Service Information

The family of Helen Durfee Jones created this Life Tributes page to make it easy to share your memories.

Helen Durfee Jones returned to the loving arms of her Heavenly...