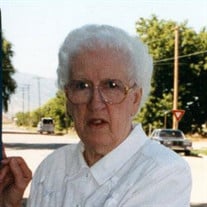 Mom passed from this life to the next just 15 days after her 96th birthday, Monday, May 30, 2016. Mother, Grandmother, Great-grandmother was loved by all. Helen was born May 15, 1920 to Perry Newton Chapman and Daisy Gibby Chapman in Provo, Utah. She was the middle child and the only girl. She graduated from Provo High and BYU where she made life-long friends. Her Major was Physical Education. She taught P.E. in Preston, Idaho; Grantsville, Utah; Lehi, Utah and Richfield, Utah, collecting more life-long friends along the way. In June 1948, Helen was called to serve in the Northwestern States Mission. She married Eugene Edward Jensen (Gene) of Richfield, Utah. To this union three children were born: Sherri Kaye, Geri and Terry Gene. They later divorced. After her divorce, Helen and her children ended up back in her beloved Provo. She worked at the Juvenile Court in Provo before ending up at the BYU Bookstore. She loved her Alma mater. Helen loved serving her church in whatever position she was needed. She served in the YWMIA as a Sports Director for many years. She loved genealogy and connected many family links. She left her posterity with a written family history as well as her own personal history. Helen leaves behind her children: Sherri (Kevin) Nostrom, Geri (Lynn) Hansen, and Terry (Kriss) Jensen; 10 grandchildren and 18 great-grandchildren with one on the way. She was preceded in death by her parents; brother, John Howard (and wife June); and brother, Perry James Chapman. The family would like to thank the Beehive House of Provo and Rocky Mountain Hospice for the wonderful care given over the last 2 ½ years. Funeral services will be held at 11:00 a.m., Monday, June 6, 2016 at the Provo 1st Ward Chapel, 195 South 100 East, Provo, Utah. Friends may call at the Berg Mortuary of Provo, 185 East Center Street, Sunday, June 5 from 6-8:00 p.m. and at the church Monday from 9:30-10:45 a.m. prior to services. Interment will be in the Provo City Cemetery. Condolences may be expressed to the family at www.bergmortuary.com.

Mom passed from this life to the next just 15 days after her 96th birthday, Monday, May 30, 2016. Mother, Grandmother, Great-grandmother was loved by all. Helen was born May 15, 1920 to Perry Newton Chapman and Daisy Gibby Chapman in Provo,... View Obituary & Service Information

The family of Helen Julia Chapman Jensen created this Life Tributes page to make it easy to share your memories.

Mom passed from this life to the next just 15 days after her...